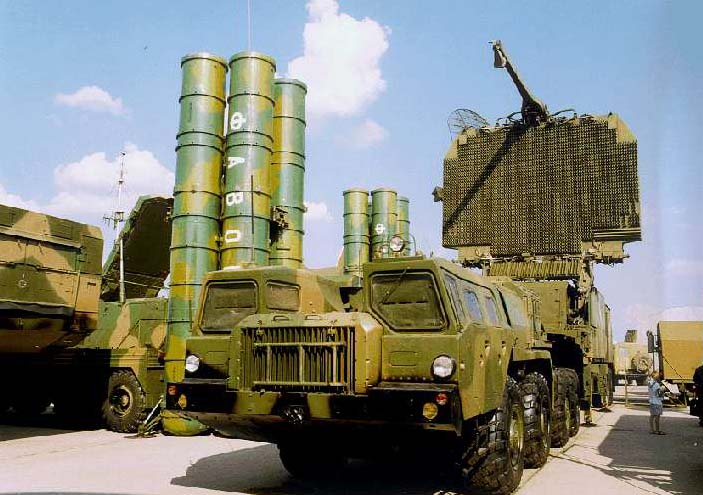 The Islamic Revolution Guards Corps Lieutenant Commander Brigadier General Hossein Salami has said that his organization now has a domestically produced missile defense system that is more sophisticated than the Russian S-300 air defense units Iran has in the past tried to acquire.

He declared that it is, "An air defense system more advanced than what they didn't supply to us due to their strategic interests."

He said this system will not be displayed to the media or the general public but will instead for now "remain confidential." (Ground Report, June 1)

Iran had in 2007 signed an $800 million contract with Russia to buy five S-300 missile defines systems. However in 2010 the Russians refused to fulfill its side of the agreement and expanded sanctions the UN Security Council imposed on Iran in that year. Iran accordingly filed a $4 billion lawsuit with Russia in the international arbitration court in Geneva. Which still has to be examined (Fars News, May 31)

Salami went as far as to claim that these missiles have "pinpoint precision capability when fired at mobile targets. This might be impossible in terms of science, but it is true and, in addition to us, only the Russians might possess this technology and even the Americans do not have it."
Posted by Paul Iddon at 11:00 AM

I call BS on that

Iran's fundamental flaw is that it does not appreciate the difference between a lie and the truth -- until it's too late.

It is more than likely that Russia has transferred the S-400 technology to Iran as it has done with China. The Russians are creating a strategic arc of allies from China to Iran. Putin now has put Russia on a Eurasian trajectory and Iran is a linchpin of this strategic view. The recent comment by the Russians that Russo-Iranian cooperation on space and rocket projects will increase could be a harbinger of things to come. Missiles and space rockets are mutually inclusive and dual use technologies.

Russia/China sells these missiles and their systems to Iran then the regime covers it up by claiming they have been manufactured locally. Total BS.

WHAT happens when a Nation claims that something is manufactured locally -WOULD the Chinese and Russians SIT ON THE FENCE and clap as Iran boast ownership of their brands?.

Actually, that is only partly true. Iran R&D capabilities and infrastructure have grown noticeably over the past decade to the point of making many skeptics revise their position towards their degree of self-sufficiency. For sure, such advanced systems undeniably enjoy input from several outside sources, but Iranian engineering teams are also known for having mastered many reverse-engineering techniques and thus be able to come up with relatively up to date designs of their own resulting from the synthesis of different subsystems. If you look closely, even the untrained eye with minimal general knowledge of weapon systems can visually distinguish hybridized nature of for example the Sayyad-2, sharing attributes from US SM-1 as well as modified SA-2 missiles. Same for their associated radar borrowing designs from Russian and Chinese tech. Such creativity was directly inherited from the Iran-Iraq war era where the country was embargoed and had to make what it could with dwindling resources of foreign equipment. The initial impetus of going it alone in military industry in 1992 started from that. Russia or China will never sell entire systems to Iran that could inevitably be traced back to them as a whole, recent unveiling by Iran in the area of air defense show both refurbished and customized modernization of pre-existing equipment, US and Israeli analyst also acknowledge this. Like it or hate it, Iran's military know-how has grown beyond the sole are of ballistic missiles and we will see an increasing scope of equipment being in a more an more indigenous way. One should not unconditionally bash and disqualify every single of their achievement and real progress solely based on the fact that he does not like the regime. (beyond the usual self-inflating propaganda BS characteristic of the IRI of course).

Considering the many additional layers of air defense put in place and its integration level complexified over the years, a foreign and distant enemy such as the IDF and its non-stealthy F-16Is would definitely have a hard time going to its Iranian targets and back without sustaining serious losses, devoid of their jamming and early warning aircraft. And their commanding officers know that, and that is why they vetoed their Prime minister's last attempt to launch a raid at the last minute a couple years ago if I am not mistaken. That was certainly not the case in 2003 and the IDF could have exploited many flaws and holes in radar coverage, let alone the backwards nature of Iranian air defense assets by then, US involvement in Iraq prevented green-lighting for such a daring geopolitical move. But we aren't there anymore, politically, economically, or militarily. They will have to cope with modernized short and mid range systems derived from Russian Buk-M1, many batteries of Tor-M1, derivation of FM-90 and I-Hawk resembling Hawk-XXI by all accounts so far, without counting the latest mid to long range Sayyad-2 or air defense squadrons of F-14s, F-4s or Mig-29 boosted by Chinese/Russian/Indian radars for their long range Air-to-Air missiles. By any means, not a walk in the park as they once love to tdhink. That's why so far we only see empty barking from Bibi rather than a lightning surprise operation as they do in Syria, Lebanon or Gaza regularly.