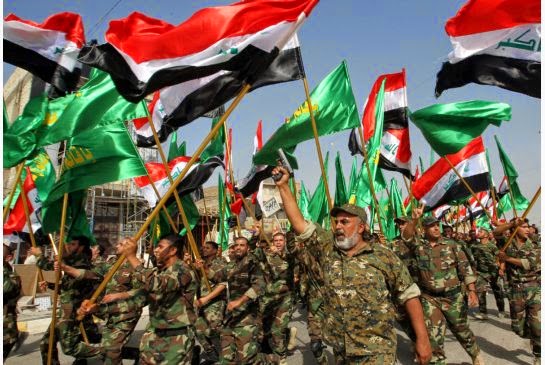 ISIL-led insurgents today expanded their offensive in western Iraq and took control of towns of Rawah and Anah and the border crossing of Qaim in Anbar province. The capture of Qaim came after heavy fighting between ISIL and an Iraqi Army brigade sent to reinforce defenses of the important border crossing with Syria. The brigade commander was reportedly killed in action. Qaim’s fall now help ISIL secure supply line to Syria, moving more easily weapons and heavy equipment across the border.
Rawah, on the Euphrates, and the nearby Anah are the first towns in Anbar to fall after the insurgents took control of Fallujah and parts of Ramadi in January. The capture of Rawah and Anah appears to be part of ISIL’s advance toward a key dam in the city of Haditha, with its 1,000-megawatt hydraulic power station. The Iraqi Army said some 2,000 troops were deployed to Haditha to strengthen the defense of the dam, AP reported today.
Meanwhile, thousands of heavily armed Sadrist militiamen today marched through Shia-dominated southern Iraqi cities in military-style parades, announcing their readiness to fight the ISIL-led insurgents, bringing Iraq closer to an all-out religious war.
Grand Ayatollah Ali al-Sistani, the religious leader of Iraqi Shias, on Friday joined calls for Prime Minister Maliki to reach out to the Kurdish and Sunni minorities a day after President Obama challenged Iraqi leaders to create a government representative of all Iraqis.

UPDATE: ISIL has now captured all border crossings to Syria and Jordan. (23 June)

ISIS can exist only in Sparsely populated Sunni Al Anbar Province
they can not move to South - East Baghdad.
That is now Job of Iraq Government to gain the Support of Al Anbar Tribe, something like what the American in Year 2007 did

FALSE victory sponsored by Saudi Arabia and overseen by a lying B.O.D !!.
Maliki has his own weakness and sidelining the Sunnis was not a prudent thing to ,and any one could have seen all this coming,however,when the BOD talks of equal a Government representing all,we would demand the same message to go to Bahrain.-

These are not false victories. ISIL is taking advantage of the feeling of disfranchisement among Sunni population to get the support of other Sunni groups and put itself in the leadership of an emerging social movement against the central government.

I am not arguing that all anti-government movements are based are sectarian differences. There are national and tribal-based movements at work there, like Kurdish nationalism, as well as secular anti-dictatorship movements, like in Syria. But unfortunately it is the religious movements that are the dominant factor in Iraq and Syria.

Sad situation in the region as a whole. And will not be limited to Shia-Sunni, but also will involve Sunni-Sunni and Shia-Shia conflicts. Unfortunately when religious wars start, it might take years, if not decades, to manage them.

On the U.S., it's best to stay away and keeps hands off these religious wars. There would be no winners here, and everyone participating will lose.

On Iran, it is walking into a trap in Iraq, as already done so in Syria. The Quds Force does not want to be identified as Shia mercenaries fighting the Sunnis, which form the great majority of the population in the region. It should stay away from Sunni-dominated areas, not their business. If these conflicts are not managed politically, and soon, Iranian armed forces will walk into a regional religious war that at the end everyone will lose.

On the last part of your comment, what you say is correct, but at the same time it is not easy for Iran to stay away from the conflicts in the region completely or it might need to meet the enemy at the gate which it knows is no longer the option after Iran-Iraq war. So it is good to be involved in a low-intensity war beyond your borders which might include some cost (money and man power) but it is better to have all your borders surrounded with extreme groups. As such Iran's involvement in Iraq, Syria will not decrease and it might very well take another direction in Bahrain, where Iran until now held a soft position in order to not create tensions with its Arab neighbors.
And yes there are winners in religious wars... Israel in the region is the main winner, thereafter Turkey which is playing a multiparty role.