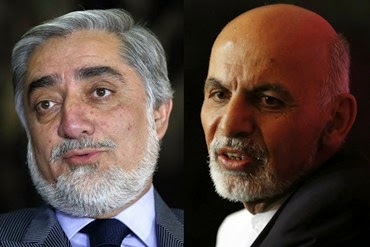 Afghans headed back to the polls in the second and final round of the country’s presidential election to choose between former anti-Taliban fighter Abdullah Abdullah and ex-World Bank economist Ashraf Ghani.

Electing a new president to replace Karzai will be the first democratic transfer of power in Afghan tumultuous history. Today’s voting was also a victory for the country’s security forces that prevented any major disruptions by the Taliban.

The new president will take power in a crucial time for the country. The U.S. and NATO forces will end their combat mission by the end of this year amid a general upheaval in the Islamic world and a growing insurgency by the Taliban inside Afghanistan.

Twelve million voters were eligible to cast ballots at 6,365 polling centers across Afghanistan, with preliminary results due on 2 July.

UPDATE: Turnout in the second round of presidential election was reported to be very high, some calling it “mammoth,” especially among women; an encouraging sign for a people under the Taliban threat. Warmest congratulations to our Afghan friends and to all Afghans.