A New Movie About an Old War 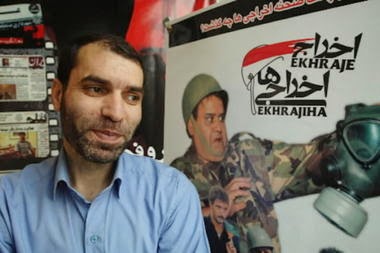 Christian Science Monitor’s Scott Peterson writes from Tehran that a new movie about the Iran-Iraq war, “The Ascendants,” by Iran’s film director and a former leader of hardline Ansar-e Hezbollah vigilante group Massoud Dehnamaki, has broken box office records, grossing $1.5 million since late March. What makes the movie intriguing is its nuanced view of the war in which Dehnamaki fought.

The Ascendants’ simple but penetrating story is about a father who tries to prevent his son, a top student, from volunteering for the Iran-Iraq War of the 1980s and from almost certain death. The story counters three decades of official narrative of the war as “sacred defense.”

To read Peterson’s review of the film, please click here

Photo credit: Iranian filmmaker Massoud Dehnamaki, with a poster of his 2007 movie, Ekhrajiha, in the background. (Scott Peterson/Getty Images)

https://www.youtube.com/watch?v=eksJbdgTJIY --- Iran gave up in 1988 following major Iraqi victories on the fields of battle.

I applaud Mr Dehnamaki for having the courage to throw the spotlight on the perpetuated myth of "The Holy Defense".