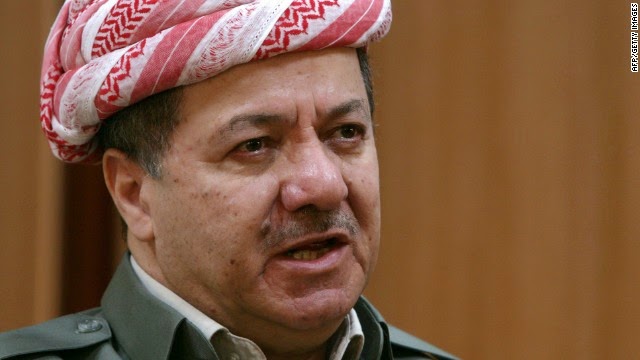 Kurdish President Massoud Barzani in an interview with CNN’s Christiane Amanpour on Monday gave his strongest-ever indication that Iraqi Kurdistan would see formal independence from the rest of Iraq. (Please see the video of the interview below)
“Iraq is obviously falling apart,” Barzani said. “And it’s obvious that the federal or central government has lost control over everything. Everything is collapsing – the army, the troops, the police.”
“We did not cause the collapse of Iraq. It is others who did. And we cannot remain hostages for the unknown.
“The time is here for the Kurdistan people to determine their future and the decision of the people is what we are going to uphold
“Now we are living [in] a new Iraq, which is different completely from the Iraq that we always knew, the Iraq that we lived in ten days or two weeks ago.”
“After the recent events in Iraq, it has been proved that the Kurdish people should seize the opportunity now – the Kurdistan people should now determine their future.
“I will ask him, ‘How long shall the Kurdish people remain like this?’ The Kurdish people is the one who is supposed to determine their destiny and no one else,” Barzani said.
Barzani also called on Maliki to step down.
“(The) situation has been very complicated. And the one who’s responsible for what happened must step down.”
Amanpour asked if Barzani meant Prime Minister al-Maliki.
“Of course. He is the general commander of the army. He builds the army on the ground of personal loyalty to him, not loyalty to the whole country. And he monopolizes authority and power. He led the military, and this is the result,” Barzani said.
The Peshmerga have recently taken control of Kirkuk, and this is what Barzani said on that issue.
“We never had any doubt at any time that Kirkuk is part of Kurdistan.
“For the last ten years, we have been waiting to have (the constitutional) article applied (to determine Kirkuk’s future), but we haven’t seen any seriousness from the central government. And since we have new developments in Iraq now, this is what brought about the new situation with Kirkuk coming back to Kurdistan.
“We haven’t done this referendum yet, but we will do and we will respect the opinion of the citizens even if they refuse to have Kurdistan as an independent state,” Barzani said.

I think this shouldn't happen.It is just of stupid maliki

Independence from where? This is not the first time that Kurds tried to be independent. It does not make any sense at all. A landlocked country surrounded by hostile nations (Turkey, Iraq, Iran and Syria) who have their own Kurdish problem will never get anywhere. Fair enough, they have some oil but that oil has to get out and sold to generate revenues. Besides Kurds are like Arabs. As soon as the external thread recedes they will start fighting with each other. In terms of education, health and hygiene they are one of the least developed minorities in the Middle East. To me it is a futile exercise and BTW talk is cheap.

The Kurdish independence should make sense to the Kurds themselves. They seem to believe that they have the chance of a lifetime to create an independent country that would be economically viable. They had already started exporting oil through their new pipeline linking to the port of Ceyhan in Turkey. Now with inclusion of Kirkuk, they will have as much oil income as compared to the percentage of Iraqi oil revenues they were to receive under the Iraqi constitution. So you will have a national entity that will be much more viable economically than many independent countries in the world today.

The Kurdish areas have historically been kept underdeveloped by rather hostile national governments they had been part of. But since it formed its own regional government in Iraq and gained de facto autonomy, Kurdistan, and Erbil in particular, has seen a remarkable transformation and economic development. You need to visit the city to change your perception of Kurdistan; how much they have achieved in such a short period.

the Kurds have spent a decade wooing Turkey and will have the support of Turkey's government. the Kurds might do very well.

And why the Iraqi Shiites cannot form their own entity, if Kurds are permitted to do so ???

Yes I agree,the Iraqi Shiites should form their own entity and all mullahs and their minions from Iran should go and live there.