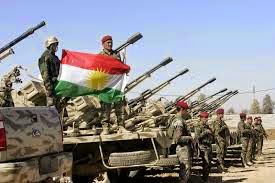 Kurdish Peshmerga forces poured into strategic oil city of Kirkuk today after Iraqi troops fled the city in disarray in anticipation of an assault by ISIL. “The army disappeared,” said Najmaldin Karim, the governor of Kirkuk.

Kirkuk is a city dear to many Kurds. Its incorporation into Kurdish Regional Government will dramatically shorten Kurdish timetable for full independence.

Oil was found in Kirkuk in 1934 and soon the area became the center of oil production in northern Iraq. Kirkuk oil fields to this day produce 500,000 barrels a day (Iraq's total oil exports is 2.2 million bpd). Kirkuk's reserves are more than 10 billion barrels.

(Correction: The original version of this post had put Kirkuk's production at 1 million bpd. Thanks to one of our loyal readers, who is an authority on oil trade, we revised the number to 500,000 bpd.)

That says a little bit about the current status of Iraqi Army. I think the Kurds should rely more on themselves for securing the north, it is a shame ISIL can so easily take over major cities in the north.

the Kurds will not surrender control of Kirkuk. they've achieved their objective and the foolishness and incompetence of Maliki has helped to make a mockery of the Shi'a-dominated Iraq that a better man could have stabilized.