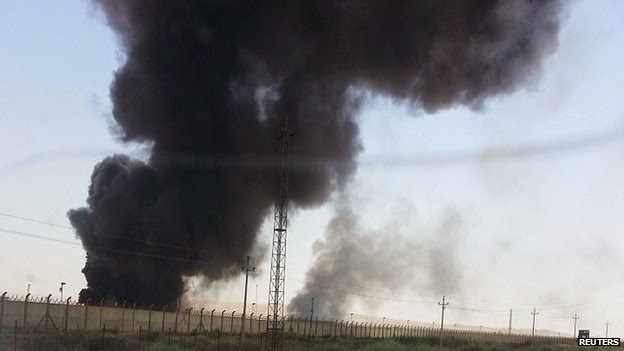 ISIL insurgents said today they have fully captured Iraq’s largest oil refinery at Baiji, BBC reported. The refinery had been under siege for 10 days, and Iraqi security forces had repulsed ISIL offensive several times during that period.
The fall of Baiji is a major blow to the government. The refinery complex supplies a third of the country’s refined fuel, and its capture will force gasoline rationing.
The government shut down the refinery on 16 June when the insurgents closed in on the main production units. It was not immediately clear if those units were damaged during the fight. But storage facilities caught fire and smoke could even be seen from the space. The restart of the refinery’s operation would give the rebels the ability to provide fuel to Mosul and other northern towns. The crude oil supplying the refinery comes from the oil fields in Kirkuk, now under Kurdish control.
The fall of Baiji refinery complex, which also houses a major power station, comes after significant advances by ISIL over the weekend, when they captured all border crossings to Syria and Jordan, and seizing four towns in the north and west. Now ISIL is expected to advance down the Euphrates, with a vital dam near Haditha in imminent danger of falling to the insurgents.

UPDATE (24 June): The ISF says it sent reinforcements to Beiji refinery on Tuesday and its military aviation attacked ISIL positions. So as of 24 June, the government claims that the refinery is still contested, and not under full ISIL control. We should have a firmer situational awareness within a day or two.

A disaster for Iran. Obama should stay out and let these two factions fight it out

This is not as bad as you may think for Iran. Let the kurds have the northern part, the sunnies the west, and iran keeps the mainly shia southern part.

If Iraq splits..The Sunnis, that have been making so much noise over the years will end up with just desert sand... I hope they're not that stupid.

We don't want the "shia southern part". There is enough mullahs and there minions in Iran as it is.