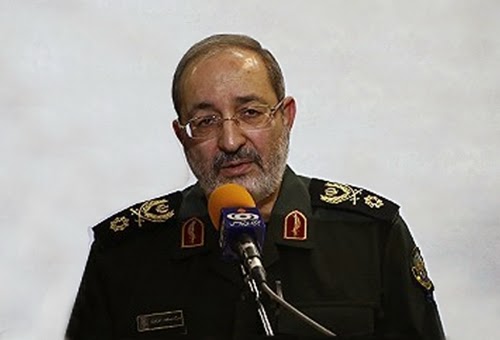 It is important to read between the lines on what Jazayeri said. Iran will not wait until the terrorists knock on the door and that is for sure. In the border area between Iran and Iraq, the Iranian Basij and NEZAJA has increased their readiness both the visible but also undercover activities. The Iranian intelligence branches relying heavily on HUMINT are watching suspecious activities in villages and cities in order to issue early warnings. This is besides the informal buffert zone Iran has established beyond the border inside Iraq for its safety.
Iran's collective assessment on the situation is shaping a pictue in which Iran some of the regional powers have created the ISIS which they hope will go first for Iranian supported elements and Iran itself it chases the local monarchies. Iran believes Saudi Arabia, Qatar, Turkey on one side together with Kurdistan (Iraqi) and Israel on the other side are joining in a secret war against Iran. They know ISIS will be a danger to them as well but it will be a danger to Iran first so they just need to get Iran involved and then run away and let ISIS and Iran fight. Kuwait is the only country which is standing side by side Iran and Kuwait has also warned Saudis that the game they are starting is dangerous in the long run as it might not be possible to stop it. Kuwait has passed some very sensitive information to Iran on Saudi, UAE and Qatari roadmap for ISIS activities against Iran, this includes support for separatists in Iranian Khuzestan province which soon be visible and open by these countries in order to create tension inside Iran. It also reveals information on suspicous Turkish support for an independent Kurdish state in northern Iraq. Kuwait hopes in return that Iran supports it to protect itself against ISIS and also excludes it from any potential Iranian retaliation against other regional countries in case of a conflict. Israel is openly supporting this plan and is actively supporting the Kurdish independence as the export of oil from Iraqi Kurdistan to Israel is now a fact. Kurds are monitoring ISIS but not actively fighting it beyond their own territories as they know ISIS is looking for Shia in Iraq and then Iran.
Iran knows that its "master plan" must give a crushing blow to ISIS and all its supporters in an indirect way in order to bring the balance of power back to Iran's advantage again. As such it might include very dramatic and orthodox methods unknown to analysts and will certainly be aligned by Russian and Chinese policies.