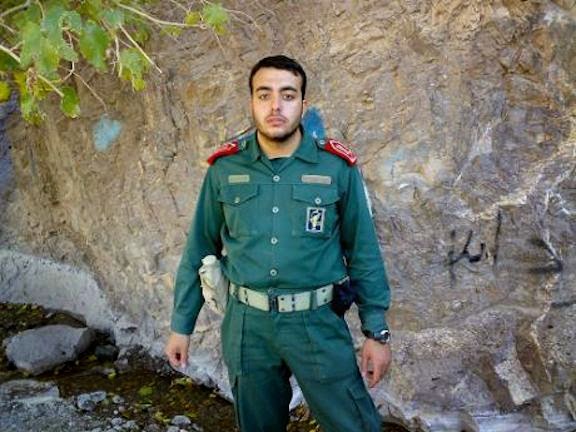 Above: Individual identified in media as IRGC guardsman Alireza Moshjari

Certain Iranian media sources are reporting Iran's first casualty in Iraq following the attack and ensuing exploitation by ISIL/ISIS militants in Iraq (some sources state he was the victim of an accident in "the west of the country"). The individual identified is IRGC guardsman Alireza Moshjari. 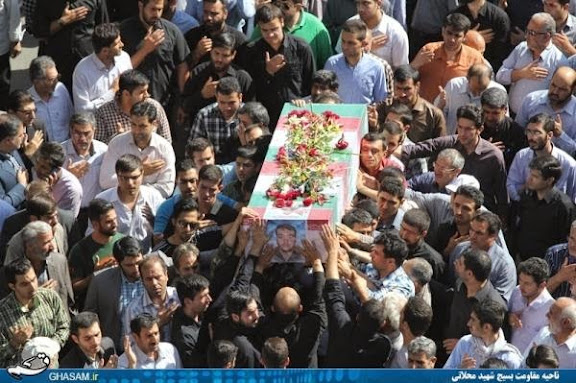 
The Quds Force commander, Iranian Gen. Ghasem Soleimani, has been consulting in Iraq on how to roll back the al-Qaida-breakaway group, known as the Islamic State of Iraq and the Levant, according to Iraqi security officials.

Soleimani's presence in Iraq is likely to fuel longtime Sunni suspicions about the Shiite-led government's close ties with Tehran.

The security officials said the U.S. government was notified before Soleimani's visit.

Soleimani has been inspecting Iraqi defenses and reviewing plans with top commanders and Iranian-backed Iraqi Shiite militias, the officials said. He has set up an operations room to coordinate the militias and visited the holy cities of Najaf and Karbala south of Baghdad, home to the most revered Shiite shrines, and areas west of Baghdad where government forces have faced off with Islamic militants for months.

Soleimani's visit adds significantly to the sectarian slant of the mobilization by the government of Prime Minister Nouri al-Maliki. Armed Shiite militiamen have been parading on the streets and volunteers joining the security forces are chanting Shiite religious slogans.

His visit and the empowerment of the Shiite militias that his Quds Force trains and arms means Iran could take a role in Iraq similar to the one it plays in Syria. The Quds Force — along with Iraqi and Lebanese Shiite fighters — has been crucial to the survival of Assad, himself a member of a sect that is an offshoot of Shiite Islam.

COMMENTARY: The Baghdad government is seeking active military support from the United States. The United States appears to be leveraging aspects of this requested support with political changes sought in the composition of Iraq's government. If the past is any indication of Baghdad government behavior,  the Maliki premiership will itself leverage Iranian support as a means of ouunter-balancing Washington in efforts to get its way. Meanwhile, per their usual practice the Iranians position themselves toward the Iraqi government in their time of need as the indispensable, more reliable ally, as demonstrated by Maj. Gen. Soleimani being on the scene assisting with the defense of Baghdad.

In this context, it may be useful to highlight differences between the time when Iran and the United States collaborated following the 9/11 terror attacks, and the prospects for renewed collaboration during the ongoing Iraqi crisis.

One major difference is the nature of the armed struggle. In 2001, while the enemy of Iran and the United States remains the same today-- Al-Qaeda and its affiliates-- the war was being pursued against a seated government, where today the war is in defense of a seated government. Thus any future American airwar campaign in Iraq will differ in intent and purpose to that during Operation Enduring Freedom, being more roughly analogous to the airwar in support of the Saigon government in the rollback of the Easter Offensive during the Vietnam War in 1972.

Another difference and further complication for collaboration this time around is the associated conflict in Syria. The governments of Iraq, Iran and Syria see the Iraq crisis in the context of the Jihadist terror threat that emerged during the American military occupation in Iraq, moved to take advantage of the instability encountered by Syria, to reemerge, resurgent and with Baathist assistance back onto the Iraqi scene. In contrast to that perspective, American observers maintain the Iraqi crisis is the result of Iraqi governance failing to adequately enfranchise the non-Shia minority populations. Even so, it must be conceded that prospective, active American military support for the Baghdad government while at the same time actively working against the Damascus government would represent a less than efficient means of pursuing war against Jihadist enemies active in both, adjoined theaters. To put the Iraq/Iran/Syria view in clearer focus, the following media report is highlighted:


Damascus-ordered SyAAF airstrikes against ISIL /ISIS targets in Syria, in display of solidarity with Baghdad


Syria's army has been pounding for 24 hours major bases of the Islamic State of Iraq and al-Sham in coordination with the Baghdad government, a monitor said Sunday.

The strikes against ISIS -- which has spearheaded a week-long jihadist offensive in Iraq -- have been more intense than ever, said the Syrian Observatory for Human Rights.

"The regime air force has been pounding ISIS's bases, including those in the northern province of Raqa and Hasakeh in the northeast," which borders Iraq, said the Britain-based group.

The regime of President Bashar al-Assad was responding to the fact that ISIS "brought into Syria heavy weapons including tanks" captured from the Iraqi army.

Ruhesh shad. May God forgive him to serve for ANY army.
But now i think U GUYS must rethink if u want this bunch of animals in state of Aasad or khamenei. And the US just wanted this situation 20 years ago. Let them fight against each other. Extremist vs. Shia vs. Sunni vs. ....and every party thinks it do's right. May some american diplomats understand this and stop saudis to provide them with money

you are a freaking shameless lair !!-a class of your own.-The problem of militant Islam can not be blamed on 'Kamenei' or Assad as your glowing intelligence would wish as to buy.
YOU are a complete foreigner to middle East politics and challenges !!.

when the head of Iran, Khomeini was funding and blessing suicide bombers we sure as heck CAN include the Iranian government in the list of sponsors of militant Islamic terrorism.

and, as unintelligent and ignorant as your comments so frequently are, you should be ashamed to call anyone else a " freaking shameless lair !!".

at least learn how to freaking spell "liar" before trying to use the word.

BMA since when have you with African background become an "expert" on ME Politics and challenges? Have you ever lived there? You should be more concerned about Al Shabab / Boko Haram animals in your part of the world, unless they are also your "brothers and sisters" !