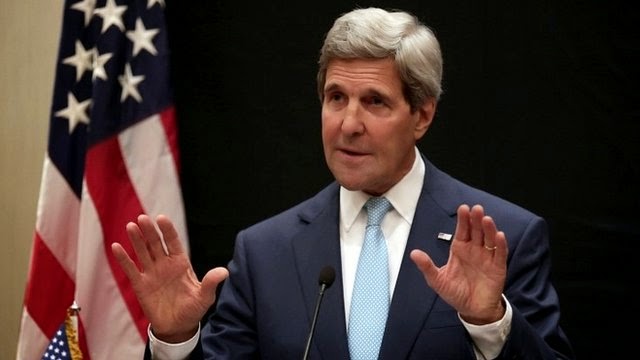 Secretary of State John Kerry arrived in Baghdad today, as ISIL-led insurgents continue their offensive. He will hold talks with Prime Minister Nouri al-Maliki, and top Sunni and Kurdish leaders in a bid to push for a power-sharing arrangement to maintain unity and stability in the country.
The U.S. is setting up two joint military operations centers with the Iraqis, sending new military supplies, and the first of 300 U.S. military advisors will also arrive in Iraq within days.
President Obama said again on Sunday that the U.S. will follow a focused and targeted strategy against the ISIL.
“What we can't do is think that we're just going to play whack-a-mole and send US troops occupying various countries wherever these organizations pop up. We're going to have to have a more focused, more targeted strategy,” Obama said.

Iran’s Supreme Leader Ayatollah Ali Khamenei has expressed strong opposition to any U.S. military presence in Iraq. In a speech on Sunday, Khamenei said the conflict in Iraq was not a religious war, but a crisis manufactured by the U.S. to weaken Iraqi central government.

Meanwhile, ISIL seized three border crossings into Syria and Jordan and four nearby towns over the weekend. The last Iraqi army units also withdrew from Tal Afar and its airbase, and there were reports that the insurgents were close to controlling Baiji oil refinery, Iraq’s largest.

The sad situation Iraq is facing was created and planned long ago by those people who fervently supported the losing Rats in Syria.

@-The BOD is living once more to its billing as the most cunning and lying empire ever!.Should the citizens of the middle East trust the US bring peace in Iraq while at the same time it is shamelessly training the militants in Jordan?.And where is the security council?

Forget the american, they do nothing
Iran has delivered 88 fully Equiped Sukhoy Figtherjet to Iraq
http://www.iraqinews.com/iraq-war/iran-transfers-88-russian-sukhoi-fighter-planes-iraq/

This is great news. Hopefully this transfer includes Su-20/22M series, specially made for low altitude boming and strafing attacks on ground targets.