American obervations of Iran's military during the Iraq crisis

American officials recently provided the New York Times with a number of observations on Iran's military disposition toward Iraq during the ongoing 2014 Northern Iraq Offensive. This brief post will discuss some of these observations.

According to the New York Times article by Michael R. Gordon and Eric Schmitt:


Iran is directing surveillance drones over Iraq from an airfield in Baghdad and is secretly supplying Iraq with tons of military equipment, supplies and other assistance, American officials said. Tehran has also deployed an intelligence unit there to intercept communications, the officials said.

The secret Iranian programs are part of a broader effort by Tehran to gather intelligence and help Prime Minister Nuri Kamal al-Maliki’s government in its struggle against Sunni militants with the Islamic State in Iraq and Syria.

COMMENTARY: It can be said the current Syrian conflict, which the governments in Tehran, Damascus and Baghdad perceive as a linked conflagration, has provided the IRGC-QF as a valuable primer in its command, organizational and logistical approaches, as well as militia training efforts in assisting the Baghdad government.

COMMENTARY: During the conflict in what the Iranians view as the Syrian theater of operations, logistical support flights have primarily been conducted through the use of Boeing 747 cargo aircraft and Ilyushin Il-76 multi-purpose four-engine strategic airlifters. Again, Iran's military air logistical support organization has been well served by its experiences in the Syrian conflict. 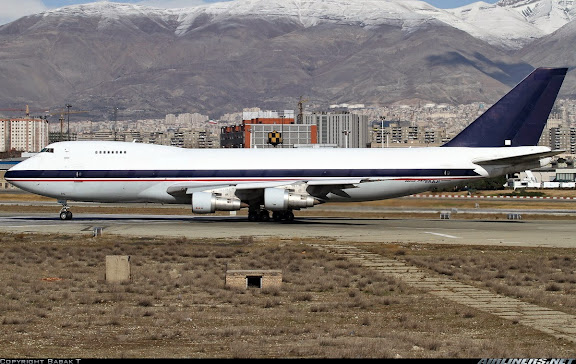 Iranian Boeing 747-2J9F, reg. EP-AJI (cn 21507/340) . This specific aircraft has been known to operate military logistical missions from Iran to Syria. Interestingly enough, this B747 appears to have been switched from a military serial to that of civilian registration for flights into Syria. There are also a number of Iranian operators of Boeing 747 type aircraft capable of running supplies to both Syria and Iraq. 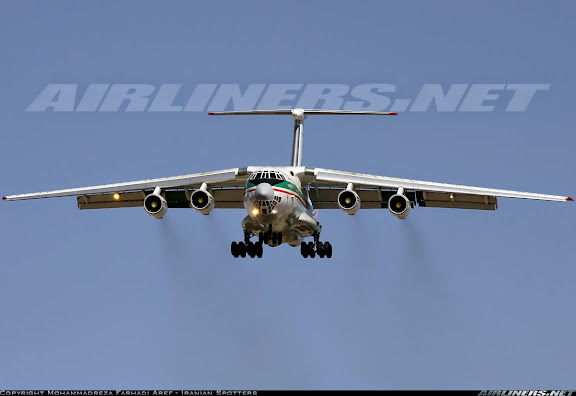 
The American and Iranian military moves are not coordinated, American officials said. Even though the United States and Iran both oppose the Islamic State in Iraq and Syria, known as ISIS, they are still competing for influence in Iraq and are backing opposing sides in the civil war in Syria.

COMMENTARY: The very name of the terror group ISIS links the conflicts in Iraq and Syria.

There has been a competing interest in Iraq between the United States and Iran since the onset of OIF. While it may appear that certain cultural, historical and regional ties favor Iran in this competition, and while the urgency of the current crisis might appear to favor Iran with its sway over Shia militia groups, it must be reckoned now or in the future the essential force in providing a military solution to this conflict is the heavy application of United States tactical airpower. in a role very much similar but anticpated to be even more effective than the initial phase of OEF.


Iran has mounted a parallel effort, according to American officials. It has set up a special control center at Al Rashid airfield in Baghdad, and is flying its own small fleet of Ababil surveillance drones over Iraq, said one American official. 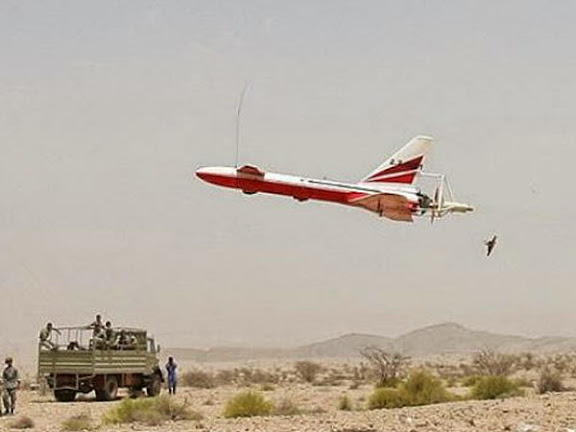 
An Iranian signals intelligence unit has been deployed at the same airfield to intercept electronic communications between ISIS fighters and commanders, said a second American official, who also declined to be named because he was discussing classified information.

COMMENTARY: The Iranians possess a military electronics industry with a focus on SIGINT/COMINT. While not developed to the present extent, notable past successes include its application during the 2006 Lebanon War. Yet again, experiences in the current Syrian conflict serve Iran well for application during the 2014 Northern Iraq Offensive and presumed, future counter-offensive.


While Iran has not sent large numbers of troops into Iraq, as many as 10 divisions of Iranian military and Quds Force troops are massed on the border, ready to come to Mr. Maliki’s aid if the Iraqi capital is imperiled or Shiite shrines in cities like Samarra are seriously threatened, American officials say.

COMMENTARY:  To a certain extent, the repositioning of Iranian ground forces should be considered  a normal response to the level of threat that has emerged on its western border.

It should be remembered Iran massed armed forces on its eastern border in 1998, with as many as 70,000 troops positioned near Afghanistan in countering the emerging threat and provocation from Taliban forces. In the event, Iranian ground forces didn't engage in offensive operations. Instead of invasion, posturing was reckoned sufficient.

Iran's military has not been well rendered for application as a heavy, expeditionary fighting force. For years, defense priority has been given to weapons programs within a doctrine of deterrence, warding off would-be aggressors possessing superior stand-off stike forces. The American invasions of Afghanistan and Iraq prompted Iranian strategists to reorient their forces into countering an external military invasion and occupation. Subsequently, NEZAJA has been undertaking an organizational shift from division-sized units to brigades. The while, Iranian leadership has publicly admitted to a reduction in the defense budget, no doubt affected by sanctions. These identified factors and more have contributed toward Iran's selection of an economy of force doctrine being applied toward its intervention in the Syrian conflict. As such, notwithstanding a complete and utter failure of the Iraqi military situation in defending Baghdad, it may well be expected the Iranians will apply a similar level of economy of force in its intervention efforts for what they view as their Iraqi theater of operations.


“Iran is likely to be playing somewhat of an overarching command role within the central Iraqi military apparatus, with an emphasis on maintaining cohesiveness in Baghdad and the Shia south and managing the reconstitution of Shia militias,” said Charles Lister, a visiting fellow at the Brookings Doha Center in Qatar.

COMMENTARY: Among factors contributing towards Iran's leverage in Iraq is its influence upon Shia-Iraqi militias, preceding elements of which came to be as far back as the Iran-Iraq War, where Iraqi exiles and POWs provided the initial foundation for such (giving rise to a sense of Iran-Iraq War 2.0 for the current Iraqi crisis).  That said, like their NDF counterparts and compatriot Shia militia experiences in Syria, these Iraqi armed groups do not possess the likely potential as a war-winning force for Iraq (and Iran). More likely they represent a stabilizing force, providing a much more modest potential for stalemate, and with that prospect, attrition warfare.
Posted by Mark Pyruz at 4:52 AM

Bbc is reporting that Obama is asking congress for 500 million to Train and arm 'moderate' and vetted opposition groups in syria.

how dumb of the Americans. Don't they remember that the Mujahideen of Afghanistan were the same folks that were also trained and funded which ended up coming back and biting them in the As*.

Regardless this is terrible news for Iran. Russia needs to support the Syrian iraq iran axis in order for the latter to continue status quo.

Iran's strategy doesn't end where the article indicates. Iran has warned Saudi Arabia and especially Kuwait that the ISIS would be threat nr 1 to their Western monarchies. Kuwait has assigned one of its most senior officials to directly cooperate wit Iranians on how to counter ISIS. The Kuwaiti official has also convinced the Saudis about the ISIS threat and Kuwait and Saudi Arabia have created a response task group for monitoring the situation and preparing for any threat from ISIS.
Kuwait has also forwarded Iran's message to Qatar and UAE on the fact that if any Shia holy places in Iraq or any Iranian city/village is attacked "security and safety experienced in Doha, Abu Dhabi and Dubai for decades will no longer be guaranteed from Iranian side".

any first-rate military power would dare

AnonymousJune 29, 2014 at 1:43 AM
And risk starting a war with iran?,not so long as you have 40,000 us troops within reach of irans missiles in the persian gulf not to mention the nato occupation forces in afghanistan who are also in easy reach of irans weapons,so you can see that the west has a lot of reasons to avoid any military conflict with iran,if the west was so all powerful then why did they drop their nuclear demands and come to the negotiating table instead of attacking iran directly,why did they back the terrorists in syria instead of attacking it directly?,maybe those so called "first rate" military powers of yours arent as strong as you like to think and iran isnt as weak as you`d like to believe

there's little risk for a first-rate military power in a war with Iran. Iran has no navy or air force and Iran can not project any military power.

those 40,000 American troops in proximity to Iran are more than sufficient to enforce a naval and aerial blockade of Iran and to leisurely annihilate every single military installation in Iran and force the Iranian military into hiding.

I can't imagine what you're thinking of. Iran couldn't do any better against US long-range weaponry than Iraq did.

AnonymousJune 30, 2014 at 7:42 PM
Actually those 40,000 troops depend upon mainly naval resupply which iran can easily halt by blockading the straits of hormuz,it has more than enough mines,mobile land and sea based cruise and ballistic antiship missiles,not to mention submarines and fast attack craft to turn the straits into a virtual shooting gallery.Theres also little comparison between saddams missile forces,that numbered only in the few dozens and irans,irans short ranged missile forces,300km range or less,which by the way can reach virtually all of the us bases in the gulf number in the thousands,throw in the unguided artillery rockets and you`re talking in the tens of thousands,without those bases its going to be very difficult for the us to attack iran much less "leisurely annihilate every single military installation in Iran"with only carriers parked several hundred kilometers out in the arabian sea,or bombers flying from usa/europe or diego garcia.When it comes to the persian gulf iran can project quite a lot of power thanks to its missile and anti ship capabilities.In future you might want to do a little basic research maybe even take a look at a map of the persian gulf before you post this sort of tired old rant about how weak iran is or how superior the "first rate" military powers are