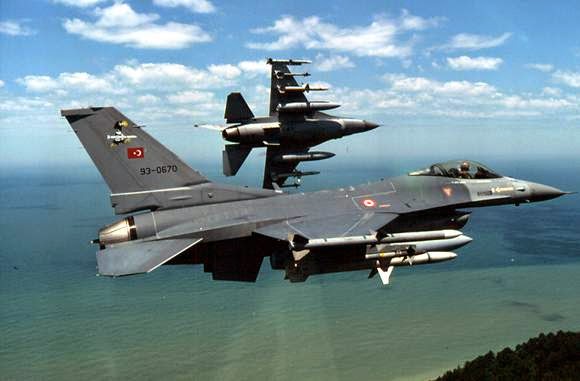 Turkey shot down a Syrian jet in late March after it violated Turkish airspace on the Turkish-Syrian border.

The game's only beginning. Turkey will be made to pay heavily and regret ever messing with Iran's ally, Syria.

Possibly IRIAF aircraft from Tabriz-Shaheed Fakouri TAB 2: an F-5 type from 21 TFS or a MiG-29 type from 23 TFS.

Yeah right. the Turkisk F-16s together with Awacs won't have any problems shredding the 1970s Akhoonds' Turd World air force.

This is most probably no jet fighter sent into Turkey, Iran is not that risk taking sending jet fighters into a NATO country for reconnaissance purposes. It is certainly advanced Iranian drone which is gauging the Turkish radar grid and its rapid reaction capability. Iran is using its drones extensively alongside its borders and also abroad in Syria. Some Iranian drones have been seen alongside Syrian-Turkish border, inside Syria but close to borderline as well by Turkish visual observer posts deployed in the region.

the only way any sane person would take, a derelict 1972 F-5 or a downgraded export model Mig-29 to challenge a Turkish F-16 Block 50/52+ "Advanced model", would be by remote control.

The IRIAF uses the F-5 Tiger II aircraft to patrol and defend its borders. Video evidence can be observed in the PBS film "Flying Down to Kabul," where a Danish woman civilian pilot is intercepted at the border by an IRAF F-5.

Mark ,
very interesting story thank you for sharing it ,but the paint job on the fighters suggest they are Azarakhsh jets ,If I'm not mistaken the F-5 Tiger II's have Asia-minor camouflage painted on them.
If true then this is an indication that the squadron of revamped and upgraded Azarakh are in active AIir Patrol duty at least up until 2006 when this film was taken ..
Regards
Leopersica

200 would chop off his leg before having to take on Turkey's air force in an Iranian jet.

AnonymousJune 1, 2014 at 5:15 PM
Actually irans f14s would likely get off the first shot in any such confrontation as their aim54s/fakours out range the f16s amraams by a fairly comfortable margin

The old F14s wont pick up a thing on radar... cuz they would get theyr living daylights jammed out of them. They would not loiter around like easy pickings whilst blinded either. Best bet is that once the F14 pilots realize the hopeless situation they will quickly decide to turn and run!