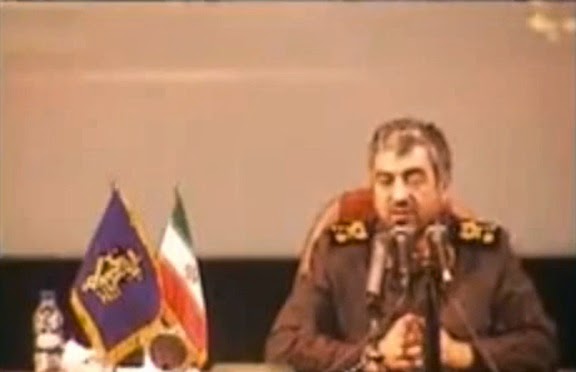 Above: still from the Facebook video depicting IRGC commander's commentary on the 2009 election


[Representative of the Supreme Leader to the Islamic Revolutionary Guards Corps (IRGC) Hojjat al-Eslam Ali Saidi] remarked on the video clip posted onlineof the IRGC commander and the 2009 sedition.

Saidi stated "Anyone can have different interpretations regarding the intent and object of the speaker when it is said. [However] paying attention to the [online video] is unnecessary, as editing before and after a sentence cannot communicate the [complete] meaning of the speaker."

It appears the Iranian establishment views this edited video and it's transcribed content in English as non-reflective of the "intent and object" of the speaker: IRGC Commander Major General Mohammed Ali Jafari. It would be interesting for the Facebook poster of the video to come forth with an unedited rendering of the complete speech.
Posted by Mark Pyruz at 1:51 AM

IRGC commander has confessed to committing fraud in 2009 presidential election to prevent Mousavi's victory. Now the Iranian "establishment" (Khamenei and his circle) want to somehow reverse the damage done to their credibility.

A reliable source within the Ministry of Interior told this blogger in the days following the disputed election that the final votes published by the officials were tailored to show an Ahmadinejad's victory, and we published that on this blog then. Now Gen. Jafari's admission to doing just that validates the accuracy of that report.

Committing fraud in that election caused protests by millions of Iranians marching on the streets of major cities in the country, which became known as the "Green Movement." This blogger argued that Khamaenei had committed the biggest mistake of his then 20-year leadership by so blatantly interfering in the election, reversing a practice of the supreme leader to stay above the factional politics, weakening the institution of supreme leadership in the process.

Now instead of trying to change the meaning of what Jafari so clearly stated, Khamenei and his close circle of advisors should free Mousavi, Karrubi and Rahnavard without any delay. They have been detained under "house arrest" for nearly five years for protesting a fraud that is now admitted to by IRGC commander.

Jafari admitted that the regime is rotten to its core. There is no going back on this.

Honesty it's very funny that someone like you who used to easily dismissed the Leveretts as apologists of the IRI in spite of their brilliant record and their insider profile which clearly makes their information more credible and reliable would want others to believe your so called "reliable source" theory.

Yes you did not make the video, but the source of the video is something an objective analyst need to be cautious about especially when there is claim that the video has been edit and knowing the type of presstitude the western MSM as become. We all saw their complicity in the Iraqi genocidal war (with a loss of over a million life and still counting in ripple effect).


Well rest assure, their are many of your like minds on this forum who will celebrate this as a victory so you don't have to worry about ignorant one's like me.

In the end we all have the right to choose what we believe.

Who talked about Leveretts here? The topic is General Jafari's statement, delivered in a direct and no uncertain way expected from a general officer, that the IRGC considered Mousavi's victory as a red line, and committed fraud to announce Ahmadinejad's victory in the first run.

With all due respect to Leveretts, and I do have a lot of respect for them, Gen. Jafari's statement should be taken at its face value, because of his position in the Islamic Republic. I am sure in light of Jafari's statement, Leveretts will revise their previous statements on the 2009 election.