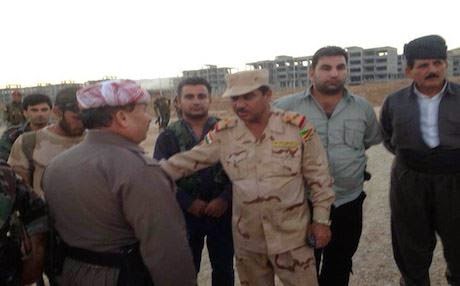 Kurdish news site Rudaw reported that last units of Iraqi army fighting in Tel Afar pilled out of the town on Sunday and entered the Kurdish-controlled areas further east. The fall of Tel Afar airbase marks the end of the last Iraqi resistance against ISIL in Nineveh after a fierce battle for more than a week.

“After nearly a week of fighting in Tel Afar airbase, eventually, Abu Walid, the commander of the Nineveh Operations, withdrew (from Tel Afar) and arrived at Shangal,” said Sarbast Bapiri, head of KDP in Shangal. “Abu Walid and the 10th brigade (of IA 3rd Division), with 600 Iraqi troops and 60 military vehicles, handed themselves over to Peshmerga forces in Shangal,” Bapiri added. (Rudaw, 22 June)

In the last 24 hours, Tel Afar became the fourth Iraqi town to fall to ISIS militants, including Rawa, Ana and Husaybah in Anbar province, as well as the strategic border crossing of Qaim.

UPDATE: The Iraqi government's military spokesman confirmed the fall of Tel Afar, descrbing it as a "tactical withdrawal." (23 June)