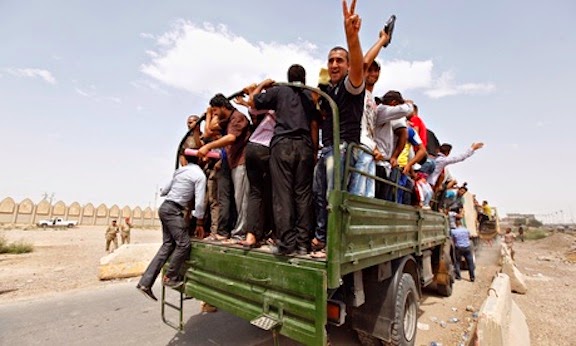 
Reports from the past 24 hours of Iran military-related developments in Iraq followed by commentary.


Gen. Qassim Suleimani… commander of Iran’s paramilitary Quds Force, flew to Iraq this week with dozens of his officers to advise the country’s beleaguered leadership about how to blunt the advance of militant forces on Baghdad, American officials said Friday.

The general is… the current architect of Iranian military support in Syria for President Bashar al-Assad.

American intelligence and military officials said Iran had sent some weaponry and equipment to Iraq, but discounted news reports on Friday that the Quds had sent hundreds of troops to reinforce the Iraqi Army, whose northern divisions have folded in the face of the Sunni militants.

A senior Iraqi official on Friday warned, however, that his country might be forced to turn to Iran for military help if none were forthcoming from the United States — even as he insisted he was unaware of any Iranian military units in his country at the moment.

The official, who is an adviser to Iraq’s prime minister, Nuri Kamal al-Maliki, said that the Iraqi government wanted air support and intelligence sharing, in particular, from the United States.

More than a year ago, General Suleimani assured Mr. Maliki in a meeting in Baghdad that if Iraq was ever in jeopardy, Mr. Maliki could mobilize Iraqi Shiite militias to fight on behalf of the government, an American official said. These would be similar to the so-called special groups — Iraqi Shiites trained by the Iranian Quds Force in Iran — that battled the Americans during the Iraq war.

COMMENTARY: This appears to be a more accurate rendering of IRGC-QF participation in the ongoing Iraq crisis, consistent with their military assistance efforts in neighboring Syria.

Iraq is indeed in dire need of a capable air force and intelligence sharing, with which the American military excels. There are even reports that President Obama is considering air strikes in both Syria and  Iraq, which would demonstrate linking the conflict in both countries-- a point Iraq, Syria and Iran have been publicly stressing for some time now.

IRGC-QF direction of battle in Iraq is set to differ in key respects from the period of American military occupation. During that period, the American military relied on combat aviation, overwhelming firepower and a heavy logistical presence. The current situation in Iraq is very similar to what is taking place in neighboring Syria, where IRGC-QF tactics have been developed against determined, hardy Jihadist fighters dug often in built-up or urban environments, with IRGC-organized militias often times proving more motivated and reliable in combat.

One of the weak links for Iraq is the lack of a capable air force. The Iranian air forces' fixed wing combat aircraft-- IRIAF and IRGC-AF --are not in a state of fit and lack the numbers of operable aircraft for sustained operations, and any potential losses can not be replaced with additional acquisitions. To some extent, this might explain certain Iranian officials' public statements of floating the idea of a shared role in stabilizing the military situation in Iraq.


From the New York Times:


The Maliki adviser... said he was not aware of any direct Iranian role in Iraq, nor the presence of any Iranian units on Iraqi territory.

The adviser said that the Iraqi government was not to blame alone for the success of the Islamic State of Iraq and Syria’s advance through the north of the country. He blamed Turkey, because it was angry over Iraqi support for the regime of President Bashar al-Assad of Syria, and the Kurds, who wanted to profit from Iraqi weakness in the north, which on Thursday helped them to take Kirkuk, an oil rich prize long shared between the Arabs and the Kurds in an uneasy truce.

“So yes there are cases where the Iraqi army disappeared but you have to take the locality in context,” the adviser said. “The 2nd Division of the Iraqi Army is 80 percent Kurds and 20 percent locals, the Kurds withdrew to the Kurdish areas and this started a panic.”

“Turkey wanted to unseat Bashar al Assad and now they see the Iraqis helping him and this is payback,” the senior official said. “This is part of that, I really believe that.”

COMMENTARY: And so the Iraqi blame game has begun. It has to be conceded, however, that the Iraqis have for some time now been publicly anxious about their lack of a capable air force. For quite some time, the Kurds had been lobbying against a capable Iraqi air force, fearful it would be used against them by the Baghdad government. That there has been Kurdish opportunism during this crisis is beyond dispute.

Map below depicts the fall of Mosul (which had been headquartered in Mosul, and the ensuing ISIL/ISIS motorized drive south down Iraq's Highway 1.


There is a high coordination between the Iraqi army forces and Iranian Al-Quds army, but as yet no Iranian fighter have arrived in Baghdad. If things get too vigorous, we will definitely will seek al-Quds army support, our most solid alliance, to cut-off the terrorists assault not in Baghdad but the whole of Iraq.

Iranian general Qassem Suleimani spent the day in Baghdad meeting with the leaders of his proxy militias, … Iraqi parliamentarians (prime minister Maliki wasn't on the list), and Sunni Sheikhs who control parts of Baghdad's outskirts.

His meetings suggest that he will play a lead role in organising the defence of the capital – a role that reaffirms his primacy in Iraq's strategic affairs.

"Already the CIA have sent more than 150 men back here solely to look into Isis," the Iraqi official said. "What they give us, Iran finds out about soon enough."

Suleimani's role remains less clear. The powerful figure, commander of the elite Quds force of the Iranian revolutionary guards, did not meet the beleaguered Iraqi prime minister, Nuri al-Maliki, or Iraqi generals, but the militia leaders likely to play a role in taking the fight to Isis.

COMMENTARY: It is a supreme irony that the IRGC-QF is being seen as a principal coordinator for the defense of Baghdad, and by extension the greater defense of the Green Zone and U.S. Embassy. There are calls here in the United States for the embassy to commence with a Noncombatant Evacuation Operation (NEO), not acted upon due to a variety of reasons not the least of which for the signal it would render on the country and region as a whole.

There are local reports of 150,000 volunteers massed for the defense of Iraq's holy cities but this figure  sounds high.

There is a BBC Persian claim that elements of ISIL/ISIS have advanced to within 50 km of the Iranian border,.

According to Asiran.com, Ministry of Intelligence and Security (MOIS) Deputy Hojjat al-Eslam Ali Khazaei publicly announced that 30 persons with connections to ISIL/ISIS had been arrested in Iran during the past month.


From Bill Roggio at the Long War Journal:


The lightning advance of the Islamic State of Iraq and the Sham and its allies from Mosul to the outskirts of Samarra, as well as its capture of several towns in eastern Diyala, all over the course of several days, appears to be part of a greater strategy to surround the capital of Baghdad before laying siege to it. This plan, to take over the "belt" region outside of Baghdad and cut off the capital, appears to be the same strategy used by the ISIS' predecessor back in 2006.

Today, the Iraqis have no US forces on the ground to support them, US air power is absent, the Awakening is scattered and in disarray, and the Iraqi military has been humiliated while surrendering or retreating during the jihadists' campaign from Mosul to the outskirts of Baghdad. The US government has indicated that it will not deploy US soldiers in Iraq, either on the ground or at airbases to conduct air operations.

ISIS is advancing boldly in the looming security vacuum left by the collapse of the Iraqi security forces and the West's refusal to recommit forces to stabilize Iraq. This has rendered the country vulnerable to further incursions by al Qaeda-linked jihadists as well as intervention by interested neighbors such as Iran. Overt Iranian intervention in Iraq would likely lead any Sunnis still loyal to the government to side with ISIS and its allies, and would ensure that Iraq would slide even closer to a full-blown civil war, and risk a wider war throughout the Middle East.

However, the "risk of a wider war throughout the Middle East" has already arrived in Iraq as a consequence of the current conflict in Syria. Moreover the Syrian conflict has in many ways been conveniently mischaracterized in our American national defense establishment's prevailing narrative but this may be changing, given the possibility of American airstrikes on ISIL/ISIS targets inside Syria.

That said, readers are encouraged to read in full Bill Roggio's outstanding piece in the Long War Journal.
Posted by Mark Pyruz at 3:07 AM

Iran's Army and IRGC are already heavily relying on UAVs for intelligence gathering on ISIL's movements and advancements in the area, especially around Bagdad and Samara but also Iraqi Kurdistan. IRIAF F-4Es have got permission from Iraqi government to fly intelligence only flights over certain areas of border area inside Iraq to spot potential leaks of ISIL forces into Iran. IRGC AF and also IRI AA have moved fixed wing units close to the Iran-Iraq border. Iran's intention is to quickly create a security buffer zone of 50 kms inside Iraq for quick deployment of combat ready units in the sensitive areas. This requires intelligence and surveillance buffer zone between 0-80 kms inside Iraq both on the ground but also in the air, and currently that is the main focus.

IRIGC QF has been directed by top leadership in Iran to both make a quick assessment of the situation on the ground in Iraq sensitive areas close to ISIL advancements but also the reason to the enormous success of ISIL which has been a surprise to people in Iran. IRGC QF intelligence will directly report to Supreme Leader and there is a fear that elements inside Iraqi Army have been but also are collaborating with ISIL. In Iran the assessment is that this is very much an intelligence failure as a military failure, as such it is important to understand why the Iraqi elements but also Iranian units in Iraq failed on predicting the situation until it was too late. One potential theory is that some Iraqi Sunnis inside current government have provided disinformation to Iraqi elements close to Iranians in order to keep Iranians in dark that the security situation is in good shape in Iraq. This means Iran's covert agents inside Iraqi government (and not only overt supporters) are already known to the Sunnis as all intelligence reports to Iran have been indicating a stable situation.