Evolving Iran, Shia-Iraq and U.S. responses to the Iraq crisis 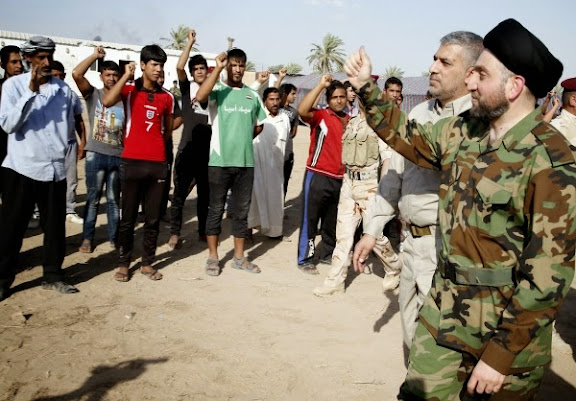 
On Saturday, Iran’s president, Hassan Rouhani, said that Iran would not rule out working with the United States to battle Sunni fighters in Iraq, but that he was waiting for the United States to make a move. “We have said that all countries must unite in combating terrorism,” he said. “But right now, regarding Iraq, we have not seen the Americans making a decision yet.”

Though not directly denying that Iran has sent troops to Iraq already, as some news outlets have reported, Mr. Rouhani said the Iraqi government had not asked for Iranian support. “If the Iraqi government asks us for help, we may provide any assistance the Iraqi nation would like us to provide in the fight against terrorism,” he said. “However, the engagement of Iranian forces has not been discussed.”

COMMENTARY: Naturally Iran's political leadership would take the opportunity of accepting a U.S. partnership of sorts in restoring the situation in Iraq, just as they did during the lead-up and initial phase of Operation Enduring Freedom. As in both former and current situations, the shared foe would be Al-Qaeda or its affiliation. Whether this is politically feasible for the Obama administration at this time may or may not be the determining factor.


On the rapid mobilization of Iraqi Shia militias, highlights from the Institute of the Study of War:


The current Shi’a mobilization, however, differs from that of 2006. It is faster. It took six weeks in 2006 for the Mahdi Army to mobilize, but the Shi’a groups have rallied within a week of the fall of Mosul. There are a number of reasons why militia and defense force mobilization is proceeding so quickly.

1. Shi’a militia groups such as Badr, the Sadrist Promised Day Brigade, and Asai’b Ahl al-Haq had already mobilized for the 2014 Iraq elections.

2. Prime Minister Maliki has been incorporating Shi’a militias into the Iraqi Security Forces since August 2013.

3. Maliki has been recruiting tribal members into protection forces since 2013 and has an administrative mechanism and recruiting centers to do so.

4. Shi’a militia groups had a mobilization effort underway for deployments to Syria. Commanders of those militias are now returning to Iraq.

5. Iraq has demonstrated its capability to move units around the battlefield since January, even though these redeployments have been a sign of the ISF’s weakness.

7. The Islamic Revolutionary Guard Corps (IRGC) – Quds Force has freedom of movement in Iraq in 2014 without American troops there. The Quds Force also has developed capacity to integrate units from the “Axis of Resistance,” as it calls its alliance with Hezbollah, Iraqi militias, and the various elements fighting for the Syrian Regime, and regular Iranian formations functioning as embedded advisory teams. Reports surfaced on June 14 that IRGC member, Ali Ridha Mashjari, was killed in ‘defense of Karbala.’ This reference is to Karbala in Iraq where there are two major shrines and therefore suggests that Mashjari was killed in Iraq.

COMMENTARY: What is obvious in many of these points highlighted by Ahmed Ali with Kimberly Kagan is that where the United States has been largely observing events leading up to this crisis as a sectarian, domestic political problem in Iraq, important elements of the Shia Iraqi political leadership, security structure and Iran's IRGC-QF have been viewing a significant portion of this through the prism of threat from Al-Qaeda affiliated expansion of conflict from Iraq in the past, into Syria and resurgent again into Iraq. A number of Iraqi Shia militiamen have already gained battle experience in Syria, for what they see as largely the same war.


On the effective partitioning by force of Iraq.


The Sunni extremists now hold sway across a broad swath of territory beginning about 60 miles north of the capital, and extending 220 miles north to Mosul and 200 miles west to the deserts of Anbar Province, where the insurgents have controlled the city of Falluja for the past six months.

The territory essentially reconstitutes what the American military, during its war here, called the Sunni Triangle: an area where Sunnis predominate and which provided fertile ground for the rise of the Sunni insurgency. It was also the area that cost the Americans by far the most casualties of the war.

The new Sunni Triangle’s apex extends farther north than before, reaching beyond Tikrit, Saddam Hussein’s hometown, another 140 miles north into Nineveh Province. In 2008, it included a belt of Sunni communities south of Baghdad, leaving the city surrounded; now, the triangle’s base remains north and just west of the capital, although as close as the western suburb of Abu Ghraib, where there have been reports of scattered insurgent violence.

This time, the militants have managed to imperil all three of the major highways leading to the north and Kurdistan, effectively cutting Kurdistan off from the rest of Iraq and worsening the risk that the country could be dismembered.

Al-Qaeda-affiliated ISIL in cahoots with the Sunni Baathist legacy have effectively dismembered the country, in a quick land grab that serves to sever this part of the country from Baghdad control. But what really took the Shia political leadership by surprise was the opportunism exhibited by the Kurds, with the initial melting away of IA 2nd Division, and the Peshmerga seizure of the Kirkuk. These two actions taken in tandem have the Shia-Iraqi leadership in Baghdad voicing heated accusations of conspiracy taking place.

Airstrikes are the most obvious and forceful potential action for the United States to undertake. Coming to the aid of the Baghdad government, such action would be roughly analogous in intent and prupose to the use of U.S. airpower upon the Easter Offensive during the Vietnam War in 1972.

However, the potential current application in Iraq would largely be seen in Iraq as the United States supporting Shia overlordship over the Sunnis. In addition, ISIL/ISIS forces are keen to deploy in built-up, urban areas. The damage to such from airstrikes would potentially render similar political and public opinion responses currently levied against Syria in their application of SyAAF airstrikes in Syria.

Duration and scope of an American air war against ISIL/ISIS are also determining factors.

That said, it doesn't seem likely that United States leadership can sit idly by, while an Al-Qaeda affiliated terror group effectively sits on a land area encompassing nearly the entire swathe of territory it seeks in newly establishing a Caliphate.

Furthermore, to not take an active part in restoring Iraq would possibly bring the IRGC-QF to the fore, given their tactical experience and expertise in fighting this type of war using similar levels of resources in Syria

The President of the United States must be weighing heavily on these that are a few of the complex factors and calculations involved in this ongoing crisis.
Posted by Mark Pyruz at 2:09 AM

NY Times said BLA-BLA
Washington Post said BLA-BLA
I say : The American will do nothing , they move only a war Ship from A to B .

The main job will be done by iran oder Iraqi

Obama is one of the most iran-capable presidents ever. Not only did he sanction the regime but now they have to fight on two fronts. The British solution of keeping Persians worried works

closer and ever closer to Iran come the terrorists.

Good point and that plus the fact that they suck the Iraqi oil, get Saudi Arabia and Qatar to finance the secret wars against Iran and its allies. Now Iran is involved in Syria, it is involved in Iraq and it has no easy time on its border with Pakistan either.
Having said that, these are signals from Americans that it is "our way or the highway". I think strongly, given Iran's current situation economically, its isolation internationally and its domestic situation, it really needs to be more coordinated with the Americans and less on collision path. I think the current president has chosen a rational way of ensure the de-escalation between Iran and the US but I hope he can move forward quickly and finish the work of establishing full diplomatic relations with the US which would be a great nightmare for some of the regional countries. So instead of complaining that this war is the work of US, Iran should also understand this war might be the work of some of the regional countries which want the hardliners in Iran to push president Rohani on his path.

Both as bad as each other.

Once again the wests miscalculations have put its interests and regional credibility at risk,once again the sunnis have chosen terrorism over anything rational,and once again it will be up to iran to solve the problem on the ground,once again the big winner here will be iran