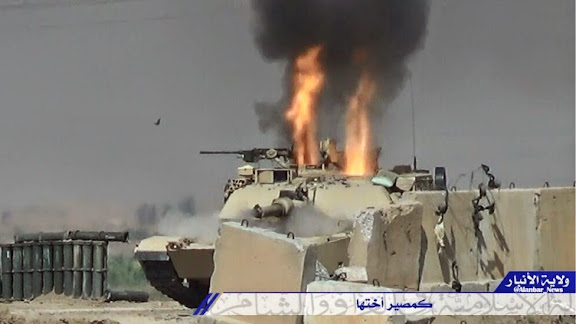 According to IHS Janes:


At least one video has emerged showing an Abrams 'brew up' after being hit by an ATGM during fighting this year in the western province of Al-Anbar. Militants operating in Al-Anbar have also released images of numerous attacks on other Abrams tanks, including ones involving a 9K11 Kornet ATGM, RPG-7 rocket-propelled grenade launchers, and a M70 Osa rocket launcher. The latter is a Yugoslavian weapon that has been widely used by insurgents in neighbouring Syria, but is rarely seen in Iraq.

Only one sequence of images posted on a pro-Islamic State of Iraq and the Levant (ISIL) Twitter account on 6 June appears to show an Abrams actually being destroyed. A militant is seen placing a charge on the tank and an object is also thrown into an open turret hatch. Flames are then seen coming out of the hatches. The fate of the crew is unclear.

Another sequence posted on 28 May purportedly shows the same militant placing a charge on or in the turret of another Abrams in a hull-down position. While the extent of the damage caused by the resulting explosion is unclear, the fact that militants are repeatedly getting close to the tanks suggests the vehicles lack adequate infantry support.

Other types of armoured vehicle in service with the Iraqi Army appear to have suffered higher attrition rates than the Abrams. Militants have released many images showing destroyed or captured Humvees, M113 armoured personnel carriers (APCs), and mine resistant ambush protected (MRAP) vehicles.

The US official also said that six Iraqi helicopters had been shot down and 60 damaged in combat between 1 January and the end of May. This represents a significant proportion of the Iraqi Army Aviation Command's assets. Another helicopter was shot down by a light anti-aircraft gun (LAAG) over Al-Saqlawiyah on 16 June; its two crew members were killed.

It is unclear what helicopters the Iraqis have lost, but militants have released footage shot using an infrared camera of heavy machine guns or LAAGs bringing down at least two Mi-24/35 combat helicopters carrying out low-altitude rocket attacks.

COMMENTARY: The Iraqi Army that was built up as part of an investment that cost $25 billion dollars was not primarily intended as an instrument fighting an urban war against irregulars, but to present a bulwark against Iran. For years this writer pointed out the folly of this orientation, as the Shia-Iraqi government in Baghdad and Tehran were sure to maintain a linked relationship.  During the current crisis, that is now more apparent than ever.

News that the United States is only contemplating a limited airwar against ISIL targets in Iraq is sure to disappoint the Baghdad government. The rationale provided to the media is a lack of targets. However it must be conceded there exists a rough equivalent of similar type targets in Iraq as there were in Afghanistan during the initial, sustained air bombardment of Operation Enduring Freedom. It appears the Obama administration has a number of reasons for this decision, including political sensitivity toward potential collateral damage and the highly sectarian nature of the current conflict in Iraq.

If the U.S. airwar is going to be limited primarily to assassination strikes, it may be assumed Iraq's war against ISIL and its allies will take on, from the Baghdad/Damascus/Tehran perspective, a similar rendering of conflict encountered and pursued in the adjoining Syrian theater of war. Likely, that will inevitably render Baghdad seeking Iranian assistance in tactical and operational expertise, training and logistical support.
Posted by Mark Pyruz at 3:00 PM

Loss of military hardware due to enemy fire has been low. What's more worrisome is how ISIS have with minimal effort been able to take over battle tank storage areas, however, do they have crews to man them (all)? Doubtful. The initial advantage of surprise is gone and their forces are now being slowed down. Eventually the tide will turn. ISIS will be forced back.

Let's hope so Brig. Gen... let's hope so indeed, I am eagerly waiting to see somthing decisive come out of the battlefield going in that direction.. Outside of any kind of (geo)political considerations and personal opinion set aside regarding the root causes of this dire and catastrophic situation the country and region are facing, and no matter who will be first to truly hammer down such advancing and bold, obstinate and almost hysterically motivated ISIL troops is a priority for anything human still bound to logical and rational thinking.

There, for once, I will be the first to openly advocate for short-term, ultra-violent, all-military answer, which constitutes in my opinion the only solution to at least be able to create space and breathing room to sit back and be able to mount a broader, serious, never seen before kind of plural political solution mediated by every possible internal as well as external actors provided they are constructive. And so, despite all the vocal opposition I made clear time and again on this blog for so long when it comes to armed involvement no matter the issue.

US and/or Iranian strikes ? why not. Iraqi army and/or volunteers coordinating ruthless and merciless counterattack waves from all over the region ? why not. That monstrosity has to be eliminated, cleansed like a cancer literally metastasizing all over the region, one country at a time, and provoking havoc all along its deadly and murderous path, and that answers to no other motivation than absolute, complete terror in the accomplishment of a completely misguided, alienated and mad quest for the unconditional establishment of its crude and nihilistic vision of a religion.

For once, let's witness mankind's ability to wreak havoc and rain down hell on earth on evil forces that leave no space for shades of grey. Can't believe I said something like that. Something has to stop the momentum of these savages running guns blazing towards innocent people and already killing massively, by the thousands.

@Basrawi,there are plenty of skilled ex-Sunni soldiers under Saddam's army that could possibly man them. Maliki has made sure of that.

To hell with ISIL !

I do agree with your overall assesment my friend, however, those cowardly bandits will for as much as they can disperse among the civilians, so there you have the troubling aspect of civilian casualties in built-up areas (that is if air strikes are used). There's much talk of airpower in the media, but in all honesty, highly motivated and well trained troops need to be readied and sent into the occupied urban areas to clean out the dirt.

Of course, the good old human shield strategy... with foes like Bush or Netanyahu whose strategies are to shoot through the hostage in order to get the villains since they also usually hated the hostages just as much, civilians wouldn't stand a chance.. with Obama however, on this particular dossier, we might be observing some welcome restraint... until when, and based on which motivations, that would be the question, and existing signs are unfortunately not in favor of a positive outcome for now. "Wait & See" applies here, but comes with its daily toll in human lives... welcome to 2014 middle-east...