IRGC Commander: Election of A Reformist Was a ‘Red Line’ in 2009 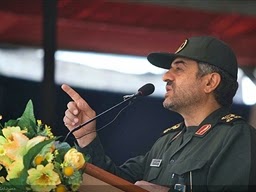 In a leaked video posted on the Facebook, IRGC Commander Mohammad Ali Jafari is seen discussing Revolutionary Guards’ response to 2009 elections with a group of senior IRGC leadership, including Khamenei’s representative in IRGC. During the presidential election that year year, reformist candidates Mousavi and Karrubi, who are now detained, ran against Ahmadinejad. In the video Jafari makes clear that the IRGC viewed the election of a reformist and the return to power of the reform movement as unacceptable:
“The worry and concern which existed and the red-line that existed for the forces of the revolution was that the forces that were against the revolution and its values, which during the period of the Second of Khordad [Khatami’s reform era, 1997-2005] had found an opportunity and had penetrated the regime, would once again come to power,” Jafari said.

“This trend [victory by the reformists] was a worrying trend. All of us analyzed that if this trend continues, the election would go into a second round [between Mousavi and Admadinejad], and it were not clear who the ultimate winner [in the second round] would be.”
“In the election and the events afterward [Green Movement], it became clear why they [reformists] insisted so much that the IRGC and Basij, under the label ‘military forces’, should not interfere with the election so that they could carry out their plot and the IRGC and Basij do not bother them.”

“Many officials, many elites, and even some clergymen are unclear in relation to the events that happened (interfering in the election), and some still have objections.”
Jafari also discusses IRGC’s role in suppressing the Green Movement after Ahmadinejad was declared the winner of the presidential election few minutes after the polls were closed.
“Two very fundamental and strategic actions had an impact in clearing up this affair. One was the very widespread arrests which was carried out by the security forces, and partially the IRGC, at the level of planners and ideologues of this affair.”
“And then the confrontations which in a widespread manner, with the presence of the Basij popular forces and the IRGC, and with the assistance of the police and security organizations, took place for confronting this affair, including the most important one which took place on Saturday afternoon.”
The latter reference is to the crackdown on the Saturday following Khamenei’s Friday Prayer sermon in which he openly sided with Ahmadinejad and ordered the protesters to leave the streets. The confrontations on that Saturday led to a number of casualties, including the death of Neda Agha-Soltan, who became a symbol of the Green Movement.
Mohammad Nourizad who has posted the video on his Facebook account is a former journalist for the conservative daily Kayhan. He was arrested after writing a critical letter about the crackdown on the Green Movement to Supreme Leader Ayatollah Ali Khamenei.
Video: Norizad’s Facebook account - https://www.facebook.com/photo.php?v=870388962988721

Jafari's comments do not represent an admission or a departure from what the security apparatus had been claiming during the post-election period of 2009.

The security apparatus, which includes the IRGC, had cited the Mousavi campaign's public statement preceding the vote count that it had "won" the election, as evidence of an attempted coup in progress. Further post-election actions by Mousavi/Karoubi and the unrest that followed, confirmed this view of the Iranian security apparatus.

Interesting to note that a commission was established for the 2013 election, as well as an accepted procedure for candidates to not engage in similar pre-tally statements of victory, a procedure all candidates adhered to during the presidential election of 2013.

Jafari's comments indeed represent a clear admission by the IRGC that they would not have accepted a Mousavi victory, it was a "red line" for them; and Ahmadinejad was declared the winner only minutes after the polls closed in order to prevent the election to go to the second round between Mousavi and Ahmadinejad . His very frank comments, indeed his confession, support assertions by some, including this blogger, that the 2009 election results were rigged to stop Mousavi's outright victory, or at the least prevent the election to go to a second round. Historically important comments by someone who was at the heart of the controversy. This is as close as we have gotten to have the IRGC commander confessing to a coup-like behavior in 2009.

I don't see this as a departure from the IRGC leadership posture leading up to the 2009n election. Back then the pre-election issue with the IRGC was the leadership's advocacy-- some characterized it as "pressure"-- for the rank and file IRGC to vote for a specific candidate of their choice, and not the reformists. The objection against the IRGC at the time referenced Khomeini's position that the military refrain from politics.

The IRGC response to that objection was (and continues to be) that a reformist win was against the interests of the Islamic Republic, and they went still further with concerns of a potential coup in the offing. In their view, the post election actions of M and K, and the resulting unrest provided confirmation of an attempted coup.

Whatever the case, from the standpoint of Iran's political establishment it surely isn't in their interest for Jafari to again rehash this subject, particularly in such seemingly direct terms. But then the IRGC and Basij leadership are continuously making "revolutionary" statements that differ little from that which was recently offered by the IRGC commander.

IRGC is not entrusted by the constitution to choose the country's president. Determining which of the candidates on the ballot should come out as winner and which one should lose, or as Khamenei's representative to IRGC had put it, "engineering" election results by the IRGC, is actually a coup.

Now after Jafari's confession, the regime should have no excuses but to release Mousavi and Karrubi, the "losing" candidates, who have been detained without charge since that infamous election.

Mark, BTW your objection to Jafari should not be why he discussed that critical episode in the history of the Islamic Republic so frankly, but why shouldn't he now be charged with crimes against the constitution and rigging of the country's national election.

The islamic regime has clearly shown it is incapable of reform.Very soon the people will have to step over its dead carcass to attain their freedom.