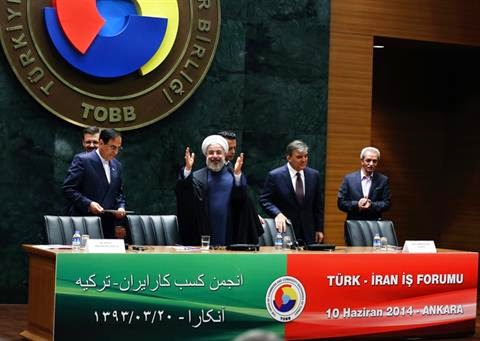 Iran and Turkey have failed to reach a deal on the pricing of Iranian gas imports to Turkey.

“Turkey purchases the most expensive natural gas from Iran among other suppliers,” Turkish Energy Minister Taner Yildiz said. “We believe Iran will go for a discount on the price of the gas because we told them that this is not sustainable,” he said. (AFP, 10 June)

Yildiz made the comment on the sidelines of a business forum in Ankara attended by Iranian President Hassan Rouhani. Turkish and Iranian ministers held extensive talks Monday on the issue but officials said Tehran has so far refused to slash its prices. Yildiz also said an Iranian delegation would visit Turkey next week for further discussions. (Daily Star, 10 June)

Turkey is one of the largest customers for Iranian oil and a major buyer of its natural gas, with about a fifth of its gas supplies coming from Iran.

Turkey’s state-owned pipeline company BOTAS lodged a complaint against Iran at an international court in Switzerland in 2012, arguing the price paid to Iran for gas imports was too high. Yildiz said that he hoped the case would be concluded by the end of this year.

Despite their differences, especially on Syria’s civil war, Iran and Turkey have been trying to forge closer relations since Rouhani’s election last year. Rouhani told the Ankara business forum that political risk factors for doing business with Iran has diminished and invited Turkish businessman to invest in the country.

Turkey is of course taking advantage of Iranian situations being isolated due to sanctions. Iran should look to European customers for its gas as the negotiations with the West is going well on its nuclear issues and most probably it will get out of the sanctions. Turkey is making a mistake by keeping this bargaining pressure on Iran, it will later backfire on its energy import costs only as Iran might even ask for more money in future negotiations.