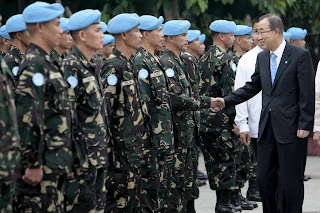 
Syrian rebels have seized twenty UN peacekeepers in the Golan Heights on the border between Syria and Israel. The United Nations Security Council demands the convoy’s immediate release.

A young fighter saying he was from the "Martyrs of Yarmouk" said the peacekeepers would not be set free until Syrian government forces withdrew from the village of Jamlah, a mile east of the ceasefire link with the Israeli-occupied Golan, Reuters reports.

"If no withdrawal is made within 24 hours we will treat them as prisoners," he said, claiming the UN forces had collaborated with Syrian government troops to drive the fighters out of the village.

After a video appeared on YouTube showing several armed-rebel fighters standing in front of two white armored vehicles bearing the UN inscription with at least five peacekeepers inside, the UN confirmed the incident.

The capture of the UN observers points to how the situation on the ground in Syria is getting out of control and all sides are unable to control armed groups on the ground, Karl Sharpo, a Middle East blogger, told RT. He further warned that that there is no way of knowing whose hands outside aid will end up.

Since the outset of Syrian unrest, certain analysts such as Crooke have observed that contrary to the narrative of the Syrian situation being merely a peaceful protest against the Syrian regime, the conflict has always possessed an armed Jihadi/Takfiri component. Here is more evidence if anyone needed it.

It could be a trick created by Assad and Islamic regime intelligence units.

For the imbeciles who were cheering for these Salafi/Wahabbi terrorits, this is just the tip of the iceberg that these FSA cowards would do if they ever "won" in Syria. Their main target will be the Zionist entity. The moronic US and its puppets who are backing these terrorists are in for the greatest blowback in the region. LOL.

True, the so-called "rebels" in Syria are Salafi/Wahabbi terrorists. This is just the tip of the iceberg of what those criminals are capable of. Still, there are people sitting comfortably outside Syria (usually in the west) cheering on those terrorists, just because they are not the al-Assad regime. They think al-Assad is bad now but, he is almost an angel compared to the the so-called "rebels". If they take over Syria, they will be even worse.

Or... it could be the work of terrorist rebels.

Let's not beat around the bush any longer; the Syrian opposition is infested with foreign terrorists. The front line consists of al-Nusrah filth.

Isn't the moronic Shiite Islamist backing the cretin terrorist Assad regime?
As far as is concerned they are all a bunch of morons from the Shiite regime in Iran to Wahhabi Saudi Arabian kingdom and Assad's regime.It's a huge cultural problem.

There is "absolutely" no chance of Moscow telling Syrian President Assad to stand down, Russian Foreign Minister Sergei Lavrov tells the BBC. The Syrian military is on the offensive with Russia continuing its military supplies including highly effective YAK-130 COIN aircraft. It has supplied Syria with newer models of MIG 29 aircraft, Yakhont missiles, T-90 tanks and other modern weapons. The Yak-130 is a twin-engined combat trainer jet that has been used effectively by the Syrian airforce against foreign funded terrorists operating from Turkey and Jordan.

Anon 7:17 PM. That's obvious now. The whole world can see that, only some people like Anon 7:53 PM are in denial because it suits the USA's foreign policy.