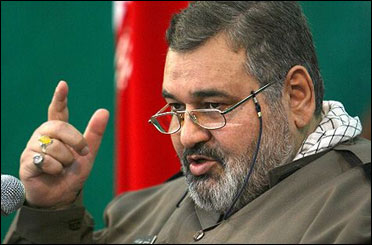 Iranian Armed Forces Chief of General Staff Maj. Gen. Hassan Firouzabadi said today that during his meeting with Ayatollah Khamenei, the supreme leader was upset that some does not take whatever he says as orders. Following is the English translation of Gen. Firouzabadi’s recollection of what was said in the meeting:

“Ayatollah Khamenei said he ‘was dismayed when he hears some people refer to whatever he says as (Leader’s) remarks. What is this? I order; I don’t talk unless I am issuing orders.’ We at the General Staff take (Leader’s) remarks as orders and implement them.” (Mehr News Agency, 7 March)

Note: This is amazing! Even Khomeini, and before him the Shah, did not consider whatever they say as “orders.” This is actually very disturbing.

Well, that is very disturbing

He (Khamenei) Is the commander in Chief of Iran's Military by the law, So Gen. Firouzabadi must follow his orders by Default. Others in the government, not so.

As Firouzabadi said, the General Staff does that as a matter of routine. Khamenei was not talking about the generals.

He is actually doing Khamenei's standing more harm, than good regardless of, if what he says is true or false. Deliberate act ? or stupidity? I tend to go for stupidity as he is a vet (god knows if even that degree was just given to him or if he actually studied for it) with no military training whatsoever. He is just a very good "Nokar". The evidence for it is that he has kept his post for such a long time.
Iranians are extremely good at "Chaploosi" no matter who the ruler is.
During the Shah, he was called "Khodayegan" etc... Now the Mullah is Emam , "Moazamollah" etc.... The Iranian have just replaced a crown with a turban.
This is the Iranian culture and mentality.
"Bezan tu sare zaif, Bebus matahte ghavi" .

He also said,"most of our enemies are within our houses,mosques,seminaries and schools."
Code for;"Most Iranians hate this regime".

Does this amount ta a virtual admission of the Islamic republic deep unpopularity?

The Ayatollah wears no clothes, and if he does he's a pretty obscene guy anyway.

Same applies to the United States Military Commander-in-Chief. POTUS provides the U.S. military (and federal employees under his jurisdiction and command ) with orders, which are not to be interpreted as "talks". Case in point: The McChrystal affair.

YOU ARE DEAD WRONG PAUL unless you break your language into pieces so that we may sift your words!!.

The subject here is the recollection of the Iran’s chief of general staff of what Khamenei had told him. As Gen. Firouzabadi said, the General Staff always took his “talks” as orders. Khamenei was not complaining about his generals.

Is that all what you have to say after your "hiding" ??

Mr. Iddon, do you think that some "authors" of this blog, use "a fig leafs" to cover their true identities....and sponsors.

What exactly are you asking A-F?