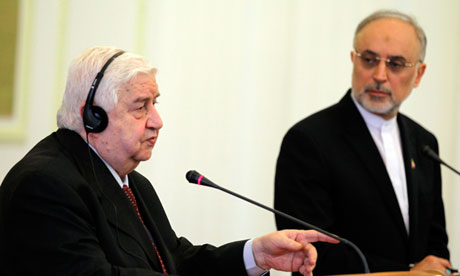 Syria and Iran condemned a move by the US to give non-lethal aid to Syrian rebels fighting to overthrow the Assad government.
“This (the aid) is nothing but a double-standard policy … One who seeks a political solution does not punish the Syrian people,” said the Syrian foreign minister, Walid al-Moualem, at a joint news conference on Saturday in Tehran with Ali Akbar Salehi, Iran's foreign minister.
The U.S. said on Thursday it would provide capacity-building assistance to Syrian rebels, including medical supplies, food for rebel fighters and $60 million to help the opposition provide basic services such as security, education and sanitation in the areas under their control. The move is seen as a way to bolster the rebels' popular support.
Salehi said the US move would prolong the Syrian conflict

“If you really feel sorry about the ongoing situation in Syria you should force the opposition to sit at the negotiation table with the Syrian government and put an end to bloodshed,” Salehi said. “Why do you encourage the opposition to continue these acts of violence?”
Meanwhile, the Guardian reported today that the rebels have been noticing a noticeable relaxation in recent days of the strict restrictions the U.S. and Turkey had put on arms flows over the Turkish border. An opposition figure told the newspaper that a Syrian army helicopter and a MIG fighter jet had been shot down in the past two days, for the first time by imported missiles.
“Before, 23mm was the maximum caliber for anti-aircraft guns permitted and we were allowed to bring in RPGs [rocket-propelled grenades] but not armor-piercing shells. But there is a major shift on the ground now. The policy is changing.
“I think the shift in American attitudes goes far beyond the official reports. I think that Washington knows it can no longer allow the to problem fester,” said the Syrian opposition figure. (The Guardian, 2 March)

Welcome to the real world!

No amount of any aid will help the Salafi/Wahabbi terrorists. It is all about demographics, since all the puppet-petropimps of the Persian Gulf combined are less than the population of Tehran, and are cowards and the rest of the Arabs are not interested in Syrian conflict the mere demographic FACTS are with President Assad. Iraq, Lebanon and in the wider Shia diaspora all the support is with President Assad. Even Turkey's 20 million Alevis are behind Assad. As long as he has majority support, the FSA terrorists simply can't even capture a major city. Turkey is too unstable and divided and will NOT intervene in Syria. Egypt the most populous Arab/African state is imploding and is not interested in dying for Syria. That leaves the US very few options.

Russia again pledged full support to the legitimate government of President Assad. China, India, Iraq even Algeria is supportive of Syrian integrity and government. The US/Zionists and NATO stooges, unless they intervene directly (highly unlikely as the US is an economic basketcase)the FSA terrorists will keep getting pummeled. The net result will be low key terrorism in Syria which the Assad regime will easily contain. The Syrian military is getting better at counter-terrorism by the day and their morale is very high. Just check out a few objective videos even on Jewtube and see how the Syrians are doing.

Please read out post today, “Quds Force Commanding General Says Syria lacks Exceptional Military Commander.” It’s better to be realistic than continue pouring out slogans. But you might not have read Soleimani’s comments before posting your own!

Wallahi as much as i dislike Bashar his chances for survival has increased much these past couple of months, much thanks to having superiority in weaponry but also, the tactics and experience have steadily improved...and the rebels have given lots of martyrs...the real question is this, how many more people are willing to join the Jihad and how many of Bashar's army men will defect to the FSA, a steady rate of replacement for lost manpower will not last forever. The FSA have higher losses from combat while Assad's forces have sometimes lost more men due to defection.

For a while the FSA were succeeding ... but now the fortunes are turning. This is by and large a war of attrition, because so far there has not been any large set-piece decisive battles, where on side delivers a huge blow to the other, the kind that determines the outcome in a quick matter of time.

Assad's best fighters are the Special Republican Guard, they are relatively few in numbers, but they are skilled and well trained, they have never surrendered, they will always stand their ground -- because they will be dead even if they give up, cause nobody will have any mercy on them, and they know it.

Anyways, it is actually the Republican guard forces that can take credit for recuding the number of the FSA. The conscripts on the other hand, the regular army, have given up at different places and crossed over to the FSA. Besides on very few occasions have they given good account of themselves. The reason that they surrender so easily is that their loyalty is dubious at best, and they see that there is a way out for them since the majority are Sunni, also they lack morale and discipline, so all these factors make them inclined to defection and favoring the FSA even though most of the rebels are from other Arab countries. There are volunteers in Syria from all Arab countries. Arab mentality is that one should join with the corresponding sect, then secondly with ones nationality. This has its root in bedouin and tribal legacy.

The same case may also be seen in Iran amongst various ethnic groups in Iran as well, a country with many different tribes going back thousands of years.