Iran Nuclear Issue Will be Resolved in ‘Near Future’ – FM 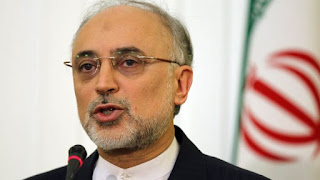 Iranian Foreign Minister Ali Akbar Salehi said today the country’s nuclear issue will be resolved “in near future.” Salehi added that both sides have the feeling that there is a way out of the current impasse, official news agency IRNA reported.

Salehi said that Iranian case is not the same as those of North Korea or Libya. “We are sure about the peaceful nature of the Iranian nuclear program,”  Salehi added.

“The Americans have recently voiced readiness to hold talks with Iran and this time their request was different from the past, showing signs of their being serious and determined to thaw the ice of the decades-old severed ties,” Salehi said. (IRNA, 1 March)

Good to see Glencore's stock being punished badly! Maybe they will learn not to deal with the Iranian leadership, the world's true evil people (along with North Korea and Dennis Rodman...aka COWARD).

no true evil is the Zionists who control Washington wage war against every people that opposes Zionism, starve them through sanctions, destroy the world economy through there alliance with the banking system and military industrial complex all so they maintain control of the region and oppress the Palestinians in there racist apartheid state

Here's what Salehi and the Iranian side are encouraged by (Iran's statement on the talks):

"Six months ago, I.R. [the Islamic Republic] of Iran in Moscow presented a comprehensive proposal for the talks. The proposal included five pillars for: cooperation and set principals and objectives for the talks.

They were supposed to consider and review the plan and provide a response to Iran. Yesterday, the other side in response to Iran, offered some suggestions that include some of the items proposed by Iran in Moscow.

Some of the points raised in their respond were more realistic compared to what they said in the past, and they tried to bring proximity in some points between the viewpoints of Iran and their own, which we believe is positive, despite the fact that we have a long way to reach to the optimum point.

The 5+1 [China, France, Russia, the United Kingdom, and the United States, plus Germany] suggested to take tangible steps for the next six months in order to build confidence and some suggestions were offered in this regard.

The Islamic Republic of Iran stressed on the steps to be balanced and simultaneous and that suggestions should not be neglect [its] rights.

Therefore it was agreed to convene the expert meeting in Istanbul on March 18th which would be followed by the 5+1 meeting with Iran on April 5th and 6th in Almaty.

We consider these talks a positive step which could be completed by taking a positive and constructive approach and taking reciprocal steps."

you really that delusional, ignorant and foolish or merely kidding?

As long as restricions on oil export and financing will stay, nobody who follows the logic should expect that Iran will accept those three western demands...

Iran may however offer a temporary suspension (for several months ?) of enrichments and extend that suspensions and carry out other steps when the sanctions will be lifted or suspended..

Lifting of sanctions and less subservience to the Zionist parasites would be a start. The greatest threat to US and the world is the global cancer of Zionism as even Erdogan acknowledged. The US economy is being sucked dry by Zionist bankers and the idiotic sanctions have cost the US deadbeat economy over $300 billion since 1979 in missed trade and potential sales and over 150,000 jobs at the least. Just the lifting of sanctions on Iranian civilian aviation would result in 10,000 new jobs and $20 billion in spares and new aircraft, not to mention energy sector, machine-tools, and high-tech sectors.

The Israeli schoolchildren dressed up as the burning Twin Towers are not the first Zionists to wildly celebrate Israel's biggest-ever attack on America. That honor belongs to the “dancing Israelis,” five Mossad spies who set up their cameras in Liberty State Park, across the harbor from the World Trade Center, early in the morning of September 11th, 2001, and pointed those cameras at the as-yet-undamaged Twin Towers. (Their video of the first plane hitting the North Tower has never been publicly released.)