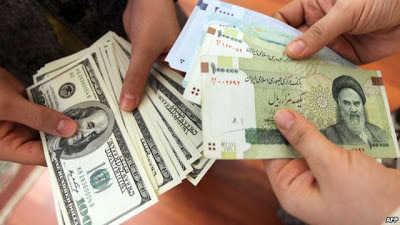 Iranian currency, the rial, has gained 14 percent in value against the US dollar. The rial was trading at 32,700 to a dollar on Monday at Tehran’s currency markets. Last week the rate was at 38,000.

Last week’s Almaty talks and the expectations for a possible compromise between Iran and P5+1 are among factors pushing up the exchange rate in the last few days.
Posted by Nader Uskowi at 7:00 AM

It would depend on the outcome of the upcoming talks in Istanbul and Almaty. If an agreement is reached, the rial's value against dollar will go up considerably, and could reach 20,000 to a dollar.

So where are all the moaners who accuse Uskowi of only reporting the depreciation of the Iranian currency?

"Iranian currency, the rial, has gained 14 percent in value against the US dollar. "

"Iranian currency, the rial, has gained 14 percent in value against the US dollar in one of its multiple exchange rates which are traded publicly."

Albeit the most important indicator of the value of the Iranian currency. Other exchange "rates" are for accounting purposes and their existence is the source of legalized corruption.

Mark,
You seem to be an intelligent person. Why do you want to cast doubt on your mental capacity, when you know that the other exchange rates are artificially constructed by the IRI government and not accepted by the market ?
Like in the new (3 months budget) when the rate of the US dollar has arbitrarily been fixed to 2100 Toman. What happened to 1260 toman?
You might want to defend the IRI (and that is your democratic right) but you will loose credibility by distorting the reality.

Actually the Iranian currency is now linked to Asian economies and the Almaty talks will fail anyway. Just read the Zionist idiot Barak's address to AIPAC yesterday. The fact is that China is about to get into a currency war with the deadbeat US and all Asian currencies including the Indian Rupee are gaining ground against the worthless US dollar. Iran is a major energy supplier to Asia. Do you you guys think that the recent Russian and Chinese naval visits to Iran after 34 years are mere coincidence? There is a major strategic shift happening in the world and China is at the helm. Get your naive minds out of the deadbeat US and look at the world in realistic terms.

I think that your silly comment is based on nothing beyond wishful thinking and your "major strategic shift" is coming out of your back door.

You have been repeating your nonsense "deadbeat US ..." and "Zionist.. bla" ad naseum, but you fail to even follow the current economic realities in Asia.
Both China and India have been trying (Like Japan for instance) to artificially lower the value of their currency toward the US dollar to be able to sell their products. That is the real Currency war going on.
Have you heard of Shale gas and Fracking? Look it up and see the major shift in the energy markets toward "the deadbeat US" in a decade and you might stop posting these nonsense.