'Both sides are getting closer to each other' - Khazaee 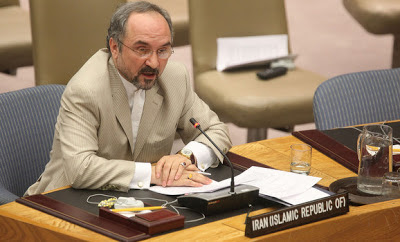 Iran would be willing to sit down for direct talks with the United States, the country's ambassador to the United Nations said in an interview broadcast on CNN on Sunday.

"I can confirm it here with you, and also for your distinguished audience, that Iran will come into negotiation and direct talks with the United States provided that we make sure that the U.S. is serious and does not act differently," Ambassador Mohammad Khazaee told CNN's Fareed Zakaria in an interview that aired on Fareed Zakaria GPS.

Khazaee said Iranians felt that at last week's negotiation with the United States and other aligned nations, "both sides are getting closer to each other."

“How much stockpile Iran can have or how much, or the enrichment at what level should be in Iran - those are, in my view, a small and technical point that should be discussed,” Khazaee said.

The sanctions are working. The "Fuhrer" will soon have to drink a second chalice of "poison" .

The cornerstone Islamic Rapists policy is "Death to America" and "Death to Israel"!
For America to except this present inhuman regime it must drop both those chants especially "Death to Israel".
Here lies the problem with this lunatic strait-jacket wearing regime.
Even if a lunatic is on medication can you trust them with a gun?
I doubt it.

Afghan TV - we want this in Iran too :

That could be great news. We'll have to wait and see.

It appears the U.S. is finally dropping the demand of zero enrichment, and possibly a deal is being worked out for purchasing nuclear fuel (possibly on Iranian soil).

Iran sounds like a rabbit chasing after a carrot??? I thought the sanctions were not hurting Iran one tiny bit....is that not what Iran's leadership & Mat & BMA have been telling us and its captive people & the world....even saying sometimes that the sanctions were/are a good thing.....Russia should throw a pile of dung into the Iran/USA talks now, as these talks will not benefit Russia in the long run!!!

Israel & the USA are NUTS to talk to these things known as Iran's leadership....they are not people.

Iranian diplomacy exercises its high morale and skills and cannot be corrupted by temptations and blackmails of the West.
They feel honors to represent independent Nation, not a kind of a satellite or Zionist's servant..

I think the deal will be that Israel & US do not force regime change in Iran in exchange for Iran dropping nuclear weapons program.

With a moslem in the White House (who believes in fairy tales!) the world will see Iran with ICBM nukes in less than 15 years.

I wonder on which day Iran's ayatollah gets a message in his sleep from the 13th Inman and decides to start launching missles in all directions???

How stupid are you? Since when is Obama a "moslem" ??
Are you one of the illiterate American christian right (Tea Party) activists who has been spreading this nonsense?