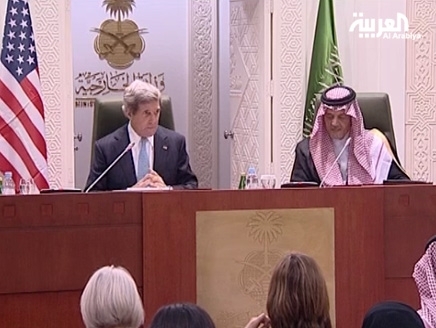 U.S. Secretary of State John Kerry said on Monday there was “finite” time for talks between Iran and world powers to bear fruit, but gave no hint how long Washington may be willing to negotiate, Reuters reported today.

“There is a finite amount of time,” Kerry, in the Saudi capital Riyadh, said of the talks between P5+1 and Iran. He made the remarks in a news conference with Saudi Foreign Minister Prince Saud al-Faisal, who echoed Kerry’s remarks.

“We can't be like the philosophers who keep talking about how many angels a pinhead can hold,” Prince Saud said. “They [the Iranians] have not proved to anybody the urgency in their negotiation,” he said. “They reach common understanding only on issues that require further negotiation. And so this is what [has] worried us.” (Reuters, 4 March)

Kerry is in the final stages of a nine-nation, 11-day trip that also include UAE and Qatar. He also had lunch with Palestinian President Mahmoud Abbas on reviving peace talks with Israel.

Meanwhile, Vice President Joe Biden vowed Monday that the United States won't back down from its pledge to use military action to thwart Iran's nuclear program should all other options fail. (ABC News, 4 March)

Even a dimwit would know, and there are many here, AS LONG AS THE ZIONISTS CONTROL US THERE IS ZERO CHANCE OF ANY DEAL WITH IRAN. It may be good to see some reality and read the moron Biden's comments and Zionist Barak's address to AIPAC. Kerry in Saudi Arabia sitting with arch pimp Saud speaks volumes about the future of so-called Iran talks. The Saudi petropimps have been pushing war against Iran agenda since 1979 and were Saddam's main backers. Do you think they will let Iran have good relations with US and the west? They are the ones arming and bankrolling Salafi/Wahabbi terrorists in Syria and the wider middle-east and South Asia. Get a grip on reality.

The US is desperate and is only in the talks to appease China and Russia as the US warmongers are isolated on Iran issue globally and the sanctions are bust. However, keeping in mind the US/Zionist current regional destabilization agenda from Mali to Pakistan, and active war against Syria, anyone who thinks that Iran will be spared and there will be roses, hugs and gaaz all around is really on some really strong hallucinogens.

What happens if there will be an agreement in Almaty in April? An agreement does not require roses and hugs, but would make sloganeering a bit embarrasing!

One has to remember what happened during the negotiations between the DPRK and the US in the 90s, when the US played a time game with the North Korea.

Maybe the Islamic Republic will draw conclusion from that situation and play its own time game, if they have to deal with an illogical and irrational adversary...

Not even a remote chance of any "agreement". It does not suit the agenda of global Jewry. Period.

Yes as embarrassing as your 34 year old predictions of Iran's imminent demise and two year old rants about President Assad's weekly fall. LOL. There is more chance of an Iranian lunar landing than an "agreement" with US as long as the Zion looters rule. Hope springs eternal around Nowruz..eh.

All that anger for not wanting to see an agreement between Iran and P5+1? Are you OK? Why are you so opposed to an agreement? Do you prefer conflict? Would reduction of tensions causes problem with your beliefs on how the world work's? I believe I am not the one that is embarrassing myself!

Iran could missed out on the chance of being Allied with the West. The storming of the US embassy was what angered the US. Otherwise US has no issues with Dictatorships. They are buddies with the Gulf Arabs and both enjoy a close and friendly relationship.

The Iranians didn't blink in the face of what looked like an imminent U.S. strike back in '07. They sure as heck ain't gonna blink now. That should be obvious to anyone that's been paying attention for years now.

AIPAC is holding their rally, so hopefully this is likely just more rhetoric.

Let's keep our fingers crossed for an upcoming agreement, and peace.

no, they won't blink. the Iranian theocracy would welcome a limited strike at this point.

but that's not going to happen. the IAEA will continue make requests and the West will continue to try to negotiate a while longer.

whie that happens, the sanctions will continue to work and the west will continue to gather information and plan various options for preventing the theocracy from assembling nuclear weapons should they decide to assemble them.

I hope the upcoming negotiations in Istanbul and Almaty would not come to who is going to blink first, and instead would be conducted in a professional manner, as was the case with last week’s talks in Almaty. As always during negotiations to resolve a dispute, the two sides must see a win-win situation for both to make the compromises required to reach an agreement. And yes, let’s cross our fingures!