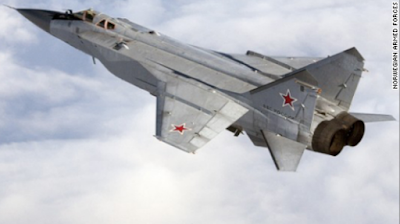 Two Russian and two U.S. aircraft came within visual range of each other -- separated by just 10 to 20 miles – over Syria on Saturday, CNN reported today.

“Both sets of aircraft moved away and there was no incident,” said U.S.-led coalition spokesman Col. Steve Warren. “But it is dangerous… It’s dangerous if two sets of aircraft come into the same piece of airspace without clearly laid out protocol for safety of all involved.” (CNN, 14 October)

So far, senior Pentagon officials have conducted two rounds of talks with the Russians to avoid accidents in air in Syria, but no agreement has yet been reached. They will hold a third round of talks today, the Pentagon said.

UPDATE: The U.S. and Russian militaries are finalizing a memorandum of understanding that sets out basic air safety procedures in the skies above Syria, Reuters reported on Wednesday.

And for sure naderjan you mean Russia have to stay away to avoid an accident.
Why do the American, who are saying that they fight against isil for more than one year with air strikes, not provide Russia with informations about the isil targets. Why they say the will not work together with Russia even Russia says just give us isil coordinates. The US say until they fight the moderate ones like Al nusra aka Al qaida (9/11) we will not help them. This makes no sense.
By the way: most ppl who comes to Europe from Syria says the problem is not assad. It's the opposition that caused trouble and war and forced them to flee the country. It's really interesting when you get informations from first hand. How ppl can trust new York times and BBC. I really don't get it. After sooooo much lies.

No, please read our update. The two militaries are finalizing a memorandum of understanding that sets out basic air safety procedures over the skies of Syria. I did not say Russia has to stay away, I said exactly what the two militaries are now doing. The skies over Syria were too crowded for safety and avoidance of incidents.

Uskowi -The B.O.D is reluctant on that too !.They notified Russia that they are not ready to meet the Russian delegation !.
-THIS is the problem when you have an overbearing boisterous empire that is law unto itself ,and doesn't care to account to anyone !.

The US only shed crocodile tears for Syrians but in reality, they are the ones escalating the conflict !.AND this is not endeavor for a Nation that wishes to be counted as a TRUE 'Beacon of Democracy' !.

I think soon, despite the agreements, we will see accidents in that region when air forces of different countries trying to keep an aggressive posture will engage with each other in one or another way.... It think Russians want to show.."F-16 no longer state of the art in the air" and as such they look for opportunities to down one, most probably it will be Turkish. There is also big risks they will try to down UAVs as these are now getting increasingly used by both sides for surveillance.