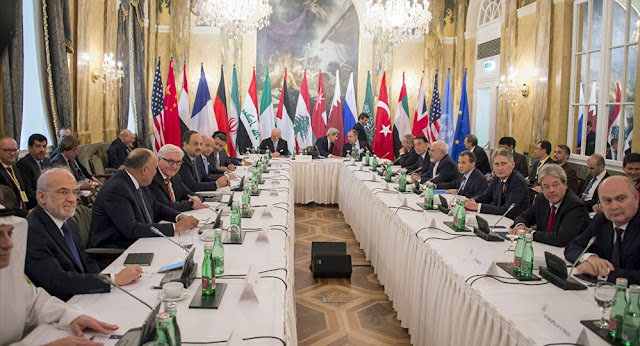 The following is the final communiqué issued today by the 19 participants in Syria Talks in Vienna:

"Meeting in Vienna, on October 30, 2015, China, Egypt, the EU, France, Germany, Iran, Iraq, Italy, Jordan, Lebanon, Oman, Qatar, Russia, Saudi Arabia, Turkey, United Arab Emirates, the United Kingdom, the United Nations, and the United States [“the participants”] came together to discuss the grave situation in Syria and how to bring about an end to the violence as soon as possible.

The participants had a frank and constructive discussion, covering major issues. While substantial differences remain among the participants, they reached a mutual understanding on the following:


The participants will spend the coming days working to narrow remaining areas of disagreement, and build on areas of agreement.  Ministers will reconvene within two weeks to continue these discussions." 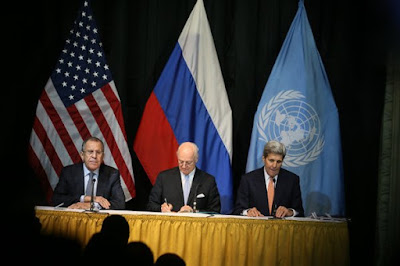 You can see Zarif's footprint in it! well done!

Amazing. It is as if Iran wrote the communique. Nearly every line mirrors the Iranian position, that's remained consistent for some time now.

Indeed Mark, well said. I also wrote the same but didn't end up in the comments adn I agree with you 100% it shows Iran's footprint all over it and it is logical! Zarif knows the soft power very well.

Comments are randomly and sometimes selectively removed without a valid reason, especially when it is a signed comment. I cannot imagine this is done by Nader - the sceptic in me asks whether some mysterious forces may be interfering with the posted comments! -R

Very rare that I delete a comment. And Nader is more permissive than I.

There is a comment moderation policy in effect. However, there may be a posting problem. Make sure you click on the "Publish" button and not "Preview" or "Sign out." I'll keep an eye out for any errors on our side. Apologies if the problem is with Blogger.

There is no posting problem. Once a message is acknowledged as sent by Google, it will have reached the moderators. +R