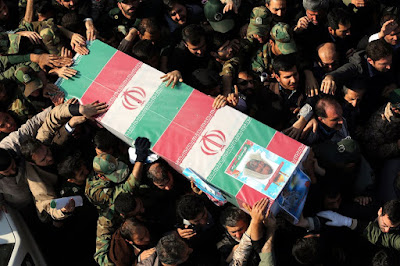 The Middle East Monitor today published excerpts from an editorial by the Iranian newspaper Bahar, which criticizes the country’s military intervention in Syria, a first in Iranian media.

“Iranian military leaders went to Syria for military consultations,” the newspaper said. “But we see the most of the Iranian military officers were killed in the battlefield in Aleppo.” (Bahar/middleeastmonitor.com, 29 October)

The Iranian military is leading major offensives around Aleppo in the past three weeks. More than 30 IRGC officers and servicemen have been killed in action during this period, including three general officers.

“If Iran needs to protect its interests in the region, and for this must protect the Syrian regime, Iran could support a new regime without Assad,” Bahar said.

File photo: Funeral procession for an IRGC serviceman killed in action in Syria (middleeastmonitor.com)
Posted by Nader Uskowi at 9:00 AM

HoHowever we view Iran intervention in Syria I believe there are two approach to tackling the Syria crisis 1) Militarily through armedarmed intervention and 2) Through diplomacy by bringing all the forces with interest in Syria together both internal and external on a round tabletable in order to disagree to agree. But a fact which is obvious to objective observer is that both approach is complimentary and intertwined, while there may be some moderate voices in Syria which can be talked to there are more irrational force which has to be fought and Iran being one of the major stakeholders and happens to be located in the middle east with her majority Shia population is in the direct line of fire so thereforetherefore choosed to fight this evil in Syria rather than the street of Tehran. At the same time iran as always used every opportunity to call for dialogue as it as always claimed that the Syria crisis can only be settled through diplomacy. It's a great pain to lose ones loved ones but they know what uis require of them before they took up the profession. May there soul rest in peace ameen.

Fully agree with you!