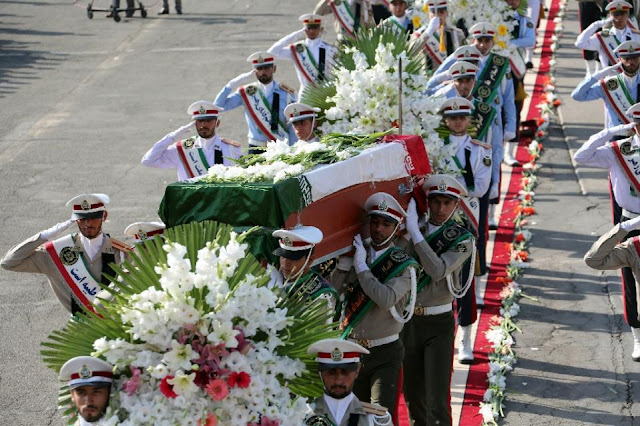 The Iranian honor guard carries the caskets of Iranian pilgrim, killed in a stampede at Hajj nine days ago, during a ceremony on their arrival. Tehran, 3 October 2015 (Atta Kenare/AFP)


UPDATE: President Hassan Rouhani and other top Iranian officials laid white flowers on coffins at a somber ceremony on Saturday in Tehran for the 104 pilgrims, among 464 Iranians declared dead or missing in the stampede. More bodies will arrive later today. Iranian health minister said not all Iranian dead had yet been found.

I think it could be sponsored terrorist act to kill Iranian worshipers, who were harassed in earlier Hajjs by security forces of Saudi Arabia, who among other cases groped young Iranian persons including boys.

This is what keeps the regime happy.A never ending supply of death and destruction.