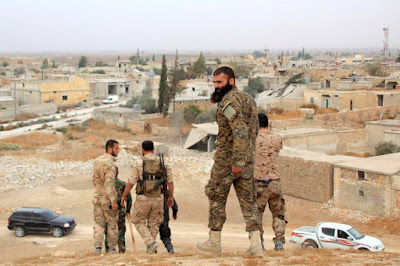 The Islamic State militants have cut off a crucial supply line for Iran-led pro-government forces to the city of Aleppo late last week. The supply line through Safira, Khanaser and Anthriya was the only way to access regime-held neighborhoods in western Aleppo. The highway, however, remains highly contested, as it's the lifeline for the pro-regime forces. Sections of the main Damascus-Aleppo highway have been cut off for more than three years. (The Wall Street Journal, 27 October)

IRGC-led pro-government forces, under the command of Gen. Soleimani, and supported by Russian air force, launched offensives earlier this month against the opposition forces south of Aleppo and ISIL to the east of Syria’s largest city. The battles have been so fierce that so far the IRGC alone has lost more than 30 officers and servicemen, including three general officers.

In the past few days, the fighting between pro-government forces and ISIL has been under way around the town of Safira, 16 miles southeast of Aleppo, and farther south in Anthriya and Khanaser. Some opposition reports indicate that ISILis close to enter Safira proper. On Monday, ISIL captured a regime checkpoint on the stretch of the road between Anthriya and Khanaser.

It would be a major blow to pro-government forces if ISIL succeeds in holding on to its advances along the supply line and disrupts it or much longer. (The Wall Street Journal, 27 October)

This could well happen, as the battle for Aleppo is just starting. But my advice on Fars: pay attention to their reports on events that has actually happened, not their prediction of future passed on as news, they're notorious for that. When the Safira-Khanaser is actually retaken by the Iran-led coalition, then send us the link. Thanks.

No wait, don't even take their reports on events that have happened or events they think happened, because they're no less notorious at that.

Case in point is their reports about Najran having already rebelled against the central government of Riyadh and joined the Houthis!

Realistically, the liberation of Aleppo, the largest city with around 10,000 terrorists dug in will be hard and tedious and no one should expect an easy "victory". The SAA, Iran and Hezbollah are pretty stretched at the moment and despite all the hyperbole, Iranian manpower commitment is very small, perhaps 3000 troops and advisers in all and Hezbollah has one brigade of similar strength. Soleimani's approach is to focus on building local militias on the Iraqi model. I am surprised that Russia has not deployed more helicopters like the advanced Kamov Ka-50 "Black Shark" attack helicopters in large numbers and are relying on pin prick MI-24 Hinds of which there are only 6 deployed around Latakia. The KA-50 in large number would the be ideal platform for infantry and COIN support in built-up environment if supporting mechanized armored infantry in street fighting. I am not sure what the Russian agenda or commitment is? not very large at this stage.