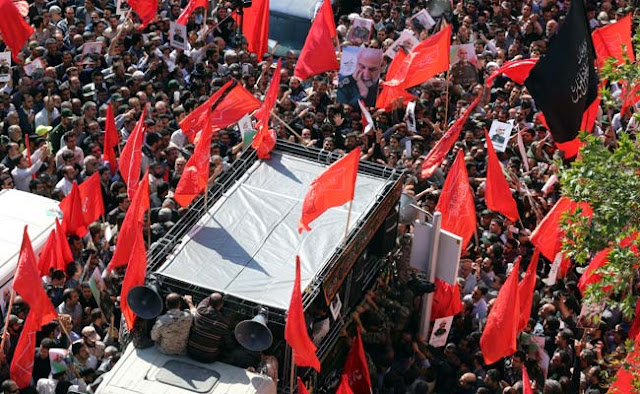 Thousands attended the funeral ceremony in Tehran for Gen. Hossein Hamedani, the most senior IRGC officer in Syria, who was killed on Thursday in northern outskirts of Aleppo. He will be buried in Hamedan, his hometown, on Monday.

For the past four years, the Quds Force has led a coalition of the Lebanese Hezbollah; the Syrian National Defense Force, a pro-government militia force which was set up under the command of Gen. Hamedani; and an assortment of foreign Shia militias, especially Afghans; in support of the Syrian army during the country’s civil war. The Assad’s regime, however, has lost strategic grounds in the past year, especially near the Alawi-dominated Latakia coast, prompting Russia's direct military intervention to stop the opposition advances.

Gen. Hamedani was reportedly killed in an area north of Aleppo where ISIL fighters are increasing their presence. Reports from Tehran say his convoy was ambushed by the insurgents.

No doubt some foreign powers gave information to the insurgents about the general's whereabouts. Turkey and Israel come to mind.

I guess everybody has their cheerleaders.

No matter how one feels about the death of this IRGC General , there is a consensus that his demise in a way is a major psychological victory for ISIL and the takfiris.
Turkey is acting more like a rogue operator when it comes to dealing eith its critics .Turks should be wary of any critisism.ISIL would go bankrupt within a few weeks if Turkey stop buying its oil and shuts down other dealings .
Israelis on the other hand are far too smart to. engage in such reckless behaviour .

What s up with all these red flags? Was the general a closet marxist?

The color red is symbolic of martyrdom in Shia Islam

I think you're wrong Mr swakil . As long as I can remember, the sacred color for Shia muslims of southern Iran and Iraq used to be black,green and white .Red was always associated with Umayyad dynasty . Red banners was especially despised since it was believed to be the favorite banner of Shemr Zol-Joshan( I guess he doesn't need any introduction).

Then how do you explain the numerous pictures of Iraqi Shia militia (shown on this website) with red banners on their vehicles with "Ya Hussein" written on them?

1) They ran out of fabric! and there was only red left to show off!...
2) They were Perspolis fan, Liverpool fan or Manchester United ... Jibrael knows!
3) Any other reason
Red is considered Shemr ibn Ziad color in Shia!

I think the original comment is correct...although more from a naive point rather than real reason...remember this revolution came into place by having Marxists (red ones) joining the Islamists (which from Iranian modernist's view has a black color not green as it is mixed with women black veil and mourning of death rather than anything else)....even the late Shah called the revolution for "unity of Marxists and Islamists". This unity has not happened in so many other places and was quite unique for Iran and as such even some elements in Soviet had some doubts around it as it was propagated by Iranian communists (especially the Soviet installed Tudeh party of Iran), but at the end of the day the Soviets were right as Iranian communists were all rounded up and massacred shortly after revolution by the new Islamic Republic.