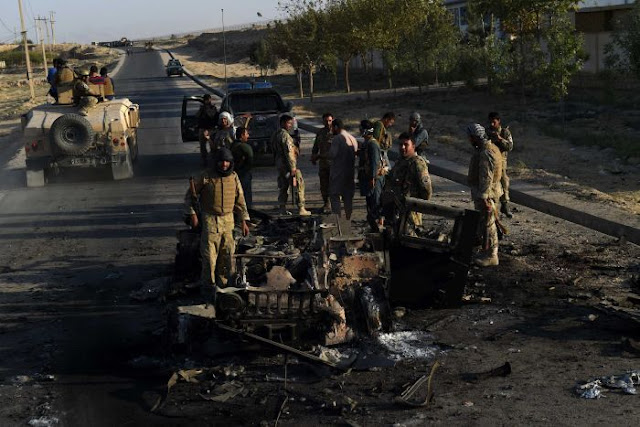 Afghan troops supported by U.S.-led coalition airpower recaptured the center of Kunduz today after fierce clashes with the Taliban, three days after losing the provincial capital to the insurgents. Clearing operations are continuing in parts of the city, including house-to-house searches for Talib fighters. The Taliban flag was removed earlier today from the central square, replaced with government colors. Military helicopters are in the sky and government forces are patrolling major streets.

Taliban spokesman Zabihullah Mujahid implicitly conceded defeat, saying the Taliban fighters had withdrawn to the edge of the city. Mujahid added the withdrawal was tactical to draw government forces into the city.

The battle to recapture the strategic town began on Wednesday when Afghan Special Forces with coalition air support entered into the city and retook control of the governor’s office and the police headquarters. News agencies reported heavy fighting in the city center early Thursday before it came under control of Afghan security forces.

Well that was easy!

Again, reminds me of the Tet Offensive 1968.

From purely military point of view , tet offensive was a total failure . North Vietnamese and their Vietcong allies suffered a horrendous tactical military loss , and they lost all the forces that were committed to this operation without achieving any military objective .
It's true that the course of the war started going badly after the tet , but it has more to do with the adverse psychological impact of the first televised war .
In short , North Vietnam didn't really win the war , it was the American public opinion that lost its willingness to sustain the conflict . However , judging by the coverage of Operation Desert Storm in 1990 by mass media, it could be argued that lessons learned in Vietnam ,were not forgotten .

http://www.liveleak.com/view?i=ae0_1444119869 --- Mainstream media plays dumb about US airstrike on hospital in Kunduz