Leader of Hardliners Threatens to Kill and Execute Zarif and Salehi 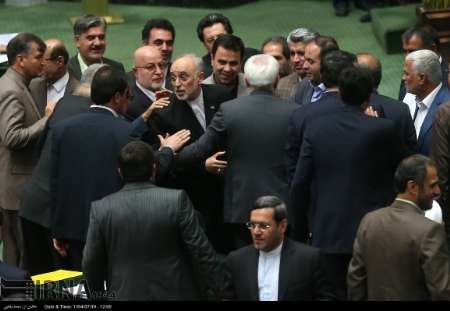 Majlis, the Iranian Parliament, on Sunday approved the “general outline” of the nuclear deal with the world power, the JCPOA, by a vote of 139 to 100, with 12 abstention.

The details of JCPOA now will be considered in the next few days. The Majlis bill dealing with the specifics of JCPOA, entitled “Proportional Measures Toward Implementation,” contains sharp criticism of some key elements of the accord.

The Majlis could refer the bill, along with a long list of its concerns over the specific provisions in the agreement, to the country's Supreme National Security Council (SNSC) for consideration and final approval.

The Majlis today was also the scene of the most heated debate in years with some MPs behaving in questionable manner, at times bordering criminal. The leader of the Resistance Front, the parliament’s hardline faction, threatened the country’s foreign minister and chief of Atomic Energy Organization to death. This is how Kamaloldin Pir-Moazen, the MP from Ardabil, described the scene:

“Today the Resistance Front MPs and opponents of Rouhani administration did all they could do (to stop the nuclear agreement bill). They threatened (Atomic Energy chief) Salehi to death and threatened to have (Foreign Minister) Zarif executed.” Pir-Moazen added that Hojatoleslam Ruhollah Hosseinian, leader of the Resistance Front, told Salehi: “We will execute you, bury you inside Arak reactor, and pour cement over you.” (IRNA, 11 October) 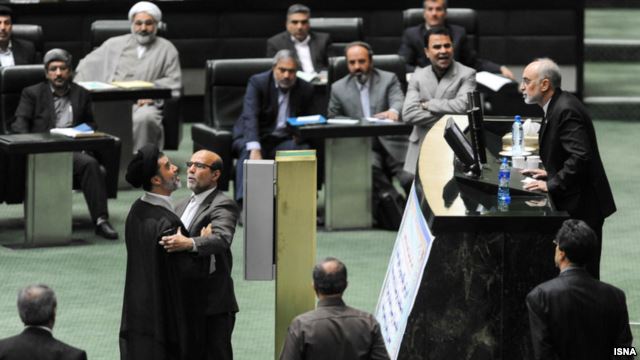 If Kayhan printing nasty words about Zarif was enough to put him in a wheel chair then death threats of this nature will likely do so too.

Iranians will certainly cheat on the nuclear deal whenever they can. Their acceptance of the deal was only to buy more time .When Iranian covert nuclear activity became known more than a decade ago , Iran was believed to have enough parts to build close to 50,000 centrifuges . Little known at the time was that those centrifuges(also (known as IR-1 type) .whose design was believed to be smuggled from Pakistan were highly unstable and susceptible to break down when spun at high speeds .The centrifuges that Iran has agreed to dismantle are believed to be of IR-1 type
.The centrifuges that Iran is going to keep or install in future are probably of type IR-6 or IR-8 which are more advanced with enrichment capability of several times higher and more stable .
Not a bad deal for ayatollahs after all .

I guess Mr Zarif and Mr Salehi should have stayed in that luxury Swiis hotel and applied for political asylum .

Why pour cement? Is that a new Zartushti insult now from the akhoonds? or is he borrowing it from the mafioso style disposing of the body?

Just another day in the "tavileh"... and people on this blog talks about reform...laughable!