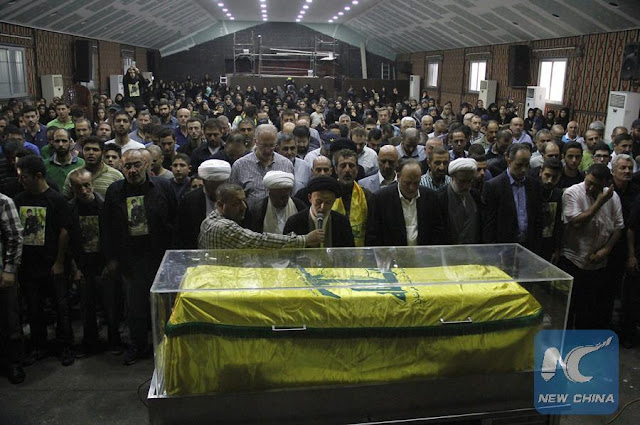 Al Haj became the second senior leader of Iran-led pro-Assad coalition killed in Syria in the past two days. On Thursday, Gen. Hossien Hamedani, the most senior IRGC oficer in Syria, was killed in the outskirts of Aleppo.

These KIAs are reminding me of USA KIAs during the mid-00's for OEF-A. If so, the length of the Syrian conflict, should it compare to OEF-A, would be of concern to that alliance as in the aforementioned conflict it has been a concern of the Obama administration.

I hope they succeed in their offensive because vahabis are 100 times worse than hizbullahis, deaths of such high ranking commanders of Al-Quds and hizbullahi brigades suggests that Al-nusra front and ISIS are slowly but surely gaining the upper hand and we will soon be witnessing the fall of Saigon. With the end of Syrian state their claim on Golan will also disappear as will the Hezbollah of Lebanon. Akhoonds have 20 million army of basijis but have failed to send them to Syria despite the clear land corridor in Iraq, 0.5% of this basiji Army would have cleared Syria and Iraq. The failure to send them together with Barjam suggests that Khamenei has accepted defeat in Syria and Palestine and is looking for exit strategy

Dear Anon,
The claim of 20 million basij has been widely exaggerated. At most, I think they can probably mobilize, train and deploy 1 million basij troops. Khamenei's decision not to send front line ground forces (as opposed to commanders and advisors) in Iraq or Syria was a pragmatic one. First of all, most Iranians have no knowledge of conversational Arabic. Secondly, sending Shia Iranians to fight Daesh would exacerbate the sectarian situation here. This is a war that should be fought and won by Arabs. This much is clear.

Iran already has a significant involvement in both Syria and Iraq on the ground which of course intelligence services of countries in the region and also beyond are very well aware of. Iran is now hoping the Russian presence, which Iran is partially paying for by its hard currency, will give the Syrian army the necessary boost and security it needs and that has exactly happened.
Furthermore Iran's popular armies (IRGC and Basij) are mainly based on the concept of martyrdom and this is indeed very hard for the Western analysts to understand as they either mix it with idiocy of some Wahabi's love for death and killing or base it on the filtered analysis of Iranian expats who indeed themselves don't understand its concept.
But the hard core elements of IRI believe they should preferably not exit from this life by natural death, which indeed everyone sooner or later will face, but rather in the cause for establishing justice ("hagh"). Of course this doesn't mean they are actively looking for killing others or getting killed but they need to keep this motto alive symbolically and in action in order to show their devotion.
As such in the doctrine of IRGC the highest ranking officers must from time to time show "battle field presence" side by side ordinary personnel in order to boost morale and show case good example of bravery and martyrdom. In other words you cannot live on your previous bravery or fame or rely too much on the stars put on your uniform, you need to perform until the end with your life at risk.
The American armed forces were also like this during the WWII as many famous and rich people risked their lives and send also their children to battlefield and some of them got also killed. But as time passed you could see less and less engagement from the top echelon of society and after the Vietnam war it is almost non-existent. Even existing high ranking officers get less field presence due to technical advancements. As such the bulk of the fighting men of the US army lacks the presence of top echelon of the society or even the presence of generals in the main front of the battlefield.