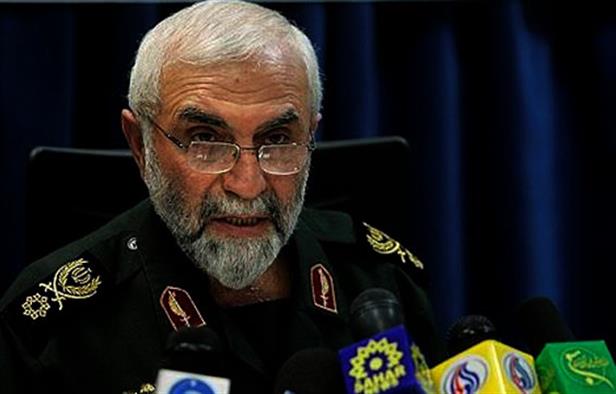 Gen. Hossein Hamedani, the most senior IRGC commmander in Syria, was killed in action during the latest offensive against the opposition. Iran’s semi-official Fars News Agency said on Friday, “Gen. Hamedani was martyred last night in the northern outskirts of Aleppo.”

Opposition forces in Aleppo have come under heavy bombardment by Russian fighter jets and cruise missiles in recent days while government forces have begun a new offensive to retake the territory around the city lost to the opposition. Gen. Hamedani was probably leading the pro-Assad ground forces when he was killed in action.

Gen. Hamedani is one of the most senior Iranian military official killed in action in Syria. His loss is a major blow to the IRGC, the Quds Force and the pro-Syrian government coalition.

Nader, you need to start a broad and inclusive forum here. This type of topic post structure is very limited.

Damn it! RIP. Huge propaganda blow for the terrorists. Any idea how he was martyred? ISIS must have targeted him specifically maybe with a sniper. I'm sure the general would not have worn a uniform clearly announcing his rank and service origins? Maybe they got extremely lucky?

Dear Unknown 09:37
Please feel free to have your own blog and choose the topics however you wish .

I'm sure that most of the general's family will find this to be sad news.

Wasn't Hamedani the commander that was in charge of putting down the 2009 riots in Tehran?

Credited with helping to establish NDF which has been instrumental in militarily maintaining Syrian Arab Republic.

At times , navigating the Middle East political labyrinth becomes a mind bugling chore . The IRGC commander mentioned in above article , was reputed to have played a leading role in suppressing his fellow Iranians during the summer of 2009( I was following the events closely but never heard of him though ) . Yet he turns up in Syria to prop up Syrian regime .. Many believe that had it not been for characters such as him and Qassem Soleimani , ISIL and Al_Qaeda affiliate Nusra would be ruling in capitals of Damascus and Baghdad .now .
Some including many in Iran will find it difficult to feel sympathy for an IRGC general , but his death may very well signal a very ominous and foreboding development .Has ISIL mustered enough operational and intelligence skills to assassinate enemy field generals with such a regularity given the number of Iranian generals killed in Iraq and Syria ?
Not many people believe that ISIL savages are capable of such complex intelligence operations , obviously some regional actors might be aiding them .
It's not enough just to target ISIL or Al-Qarda alone ,Long-term solution to takfiti terrorism should also include neutralizing their regional enablers .

This IRGC general that you claim people in Iran don't support served his country in the war with Iraq. Many young patriotic Iranians, regular people volunteered en masse to join the Pasdaran to save their country. Most people in Iran, as opposed to out of touch expatriates, recognize this fact. Also, whatever the gulf Arabs say, fighting these terrorists in Syria and Iraq is preventing the army from having to fight them on Iranian soil

Dear Swwakil
I beg your pardon , but I find your opinions to be wholly out synch with todays realities of Mid East , perhaps more so than some of those " out of touch expats " .
As far as giving Pasdaran (IRGC) credit for saving Iran during the war , it's like giving the arsonist credit for helping with putting out the fire : It was the revolution that brought the pasdaran to power that perhaps caused the war . Saddam wouldn't dare to attack Iran had it not been for the revolution by people like pasdaran in Iran .
Differentiation between Iran's legitimate national security concerns , and revolutionary zeal that has only hurt the Iranian people and emboldened the regional terrorists is a lesson lost on the current Iranian regime .

Swakil
Please keep in mind that this is a serious blog intended for serious discussion of issues . However I find your perspective to be somewhat odd .

He is right but there are plenty anyways.

A guy under his command said he was heading for a recon. mission in a region under ISIS control with his envoy when they came under attack. His car suffered a blow and lost control and then his car was sprayed with bullets. He severed a serious injury to his back and was transferred to hospital where he was pronounced dead. Interestingly he had told to his family that he will be martyred in this mission.

Most probably the intel was leaked.

I believe what swakil writes he seriously believe sin it in this serious blog. A large portion at least 44% look at IRGC this way and a large portion when mentioned he participated actively in 2009 suppression say then we congratulate him on not turning Iran into another Lybia or Syria. Anyway we should respect other views.

Swakil,Khomeini and his cohorts were all "expatriates" before handing this mess of a so called "revolution" to us.So what's your point?

Dear Anons,
Although I respectfully but wholeheartedly disagree with anon 12 34, I think anon 12 38 I right in that we are getting off topic of this post. I do not wish to engage in a political discussion about the revolution and the Islamic republic. Unlike some posters that cannot contain their bile and hatred for a second when any subject related to the Iranian government comes up. I would like to point out, however, that in my experience and extensive travels, Iranians are now in a post-revolutionary mindset, meaning they are past questions over the legitimacy of the revolution and the Islamic Republic, and are more concerned with reform. Especially since witnessing the effects of the so called "Arab Spring" close up. It is usually disgruntled expatriates that are still trying to fight battles that took place 35 yrs ago.

swakil,you can't "reform" an unreformable regime like the one in Iran.This has been proven for the past 36 years to the Iranian people within Iran.The soviet union tried to "reform" and it collapsed.Fascist regimes can't be reformed,let alone a religious fascist regime like the one we have in Iran.There are over six million "disgruntled expatriates"living abroad.So what's your point swakil?

My point is that the expatriates, as well as you I'm afraid, are out of touch with the realities of modern Iran. I would offer China as a better example for the current Iranian situation than the Soviet Union. Or even Vietnam. There are countless other examples of regimes that have reformed and lifted the quality of life of their citizenry. As for your over the top hyperbole in calling the current regime "fascist" I suggest you look up the word in the dictionary. I can name many countries in the region, close allies of the US I might add, that are far less democratic and far more oppressive of their citizenry. Saudi Arabia and Egypt for example.

swakil,I'm affraid to announce to you that the Islamic regime isn't one of them.Yes the Islamic regime is worse than fascist,because it also adds the element of extreme religion to it which becomes a self righteous religious fascist institute with a godfather on top.Saudi Arabia never says it is "democratic" but the Islamic regime claims such lies.Therefore you can add hypocricy to Islamic regime also. Iran is supposed to be a civilized country with long history and establishment of human rights over 2550 years ago.So what happend when the Islamic gangs took over the country? Nothing but mobile hanging cranes torture rape and mass murder in hidden places.I suggest you should look up the meaning of fascist again before you accuse others of not doing so.