Calling for Withdrawal of Houthi Forces from Areas Seized 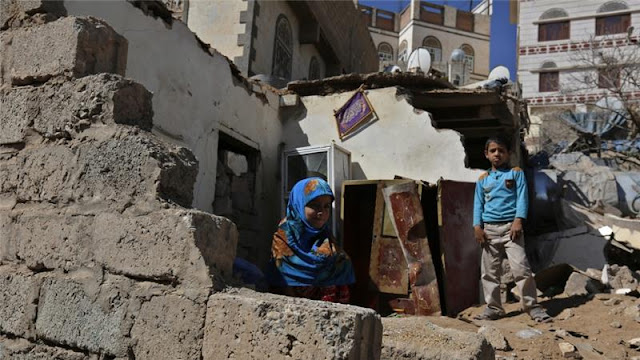 The Houthis have accepted the UN Security Council Resolution 2216, passed on 14 April, which calls on the Houthis to unconditionally withdraw their forces from areas they have seized, including capital Sanaa. UN spokesman Stephane Dujarric said on Wednesday that the Houthis accepted the UNSC resolution in letter to the United Nations.

Houthis’ decision to accept the UNSC resolution was confirmed by former president Saleh’s General People’s Congress. Saleh has been a Houthi ally during the civil war in Yemen, which began when the Houthis took control of Sanaa in September 2014.

The Houthi/Saleh representatives pledged to commit to the seven-point peace plan brokered by the UN in Oman, including ceasefire and the return of President Hadi’s government to Sanaa.

The Ansarullah side has been open to talks but the Saudi-led side has demanded acceptance of the UNSC Resolution.

Now that there's an acceptance, interesting to see what transpires.

One can imagine the reception on the street for Pro-Saudi political figures as they might return to Sanaa. Perhaps this is the political calculation made by Ansarullah. Sanaa has maintained large rallies in favor of Ansarullah, as recently as the 1 year anniversary of the revolution not long ago.

Ansarollah drank the poison chalice like their idol Khomeini...

Actually this isnt very surprising news as there were plenty of hints towards this from last month,it will now be interesting to see what the saudis and co will do considering what a military debacle this war has become,there have also been hints that the saudis were willing to consider dumping hadi if it would bring about negotiations
http://www.breitbart.com/national-security/2015/09/09/leaked-un-email-houthis-accept-some-parts-of-resolution-to-end-yemens-war/

Yes, we do need to see what transpires now. If the Houthis follow the UNSCR 2216, as they said they would, they have to "immediately and unconditionally" withdraw their forces from Sanaa, will they do that before the start of the talks?

I think it is clear the Ansarullah/Ali Abdullah Saleh alliance overplayed their hand from the start. There are indications that Iranian officials were advising them to play a role similar to Hezbollah in Lebanon: let Hadi rule, but keep a powerful veto vote on important state and security matters. Instead, they made an attempt at capturing the whole country by force, that almost succeeded, mind you. Although the Zaidi shi'as in Yemen are renown warriors, they realize they cannot win a war of attrition against the GCC. They would end up fighting a guerilla warfare campaign against the gulf arab coalition from their strongholds in the North. Acceptance of this resolution is a very pragmatic decision on their part, for as brave as their fighters are, their firepower is no match for the GCC. As such, they know that over the long term, they are unlikely to hold most of the central cities in Yemen, including the capital Sanaa, especially since these cities have Sunni Muslim majorities. If the Saudis were smart, they would sit down and negotiate now. The GCC can probably recapture Saana over the long term, but they will never defeat Ansarullah in their mountain strongholds, and trying to do that would make them suffer mass casualties, not to mention huge embarrassment on the international stage.

The saudis and co have already suffered some pretty major huge embarrassment,they`ve spent tens of billions on military hardware and yet after seven months they`ve still been unable to defeat the poorest and militarily weakest country in the middle east,militarily the saudis and the gulf states have only managed to prove what a bad joke they are.

Saudi-led coalition spokesman said on Friday 9 October that until the Houthis accept a ceasefire, the coalition will continue its military ops in the country. Acceptance of ceasefire and laying down arms were part of UNSC resolution. I believe the two sides need to agree on the terms of the implementation of the UNSC resolution, and they sure need the UN to lead the negotiations. Sooner the war ends in Yemen, better off are all sides, including the Houthis. But most importantly there would be an end to the suffering of the people. The war has gone on for too long.