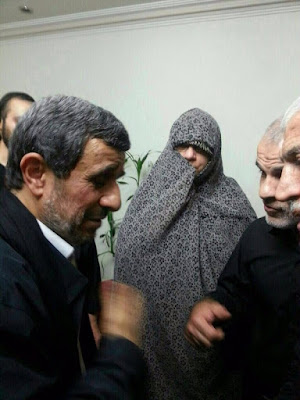 IRGC announced today that eight Iranian servicemen were killed in the past 24 hours in Syria. Fars News Agency quoted Ramezan Sharif, a spokesman for the IRGC, as saying that IRGC members Abdollah Bagheri and Amin Karimi and six other unnamed servicemen were killed in Syria yesterday and today, without giving their ranks. Reports in social media had indicated that actually 15 IRGC serviceman were killed near Aleppo, but IRGC spokesman denied those reports, saying only eight were killed.

Abdollah Bagheri, 33, one of the IRGC servicemen killed in action, was identified as the former bodyguard of former president Mahmoud Ahmadinejad. The photos in social media show Ahmadinejad at the late Bagheri’s house saying condolences to his family.

Iran was reported to have deployed some 2,000 IRGC Ground Force troops to Syria after the start of the Russian involvement in the country’s civil war on 30 September. They have joined hundreds of Quds Force advisers and specialists already in Syria. The introduction of ground troops into the conflict has changed Iran’s strategy of maintaining a small footprint of advisers to a limited deployment of ground forces directly involved in the conflict.

15 servicemen killed in action, or eight as IRGC says, is the largest number of Iranian casualties in a 24-hour period in more than 4 years of conflict in Syria.

It will become worse.And it may eventually cause the downfall of the islamic system in Iran one day.

RIP. Iran has no real choice, either fight the Wahhabi terrorists in Syria and Iraq or they will crawl into Khuzestan and Sistan. These are very brave martyrs and God indeed Bless their souls.

Agreed. These men are heroes and martyrs.

You are completely right and let us remember this is the second bodyguard of Ahmadinejad to be killed...the first one was inside Iran in Sistan-Baluchestan and it was Wahabbi sponsored terrorists who did it in 2005:
https://consortiumnews.com/2010/030710b.html
This time it happens far away from Iran ....better there than inside Iran as you have also indicated.

How many Sunni Arabs live in Iran?

Think before u type...or speak...everybody will be appreciated in this way ;)

So far , the Iranian regime has played its hand very deftly with regards to some of its internal security challenges . Despite some isolated terrorist incidents here and there , there seems to be no unusual pattern of instability in far flung provinces .Folks in Khuzestan and Sistan , and other provinces for that matter , need only look at the horror shows put up by ISIL and Taliban in the neighboring countries before deciding that their lot will be better off with ayatollahs on Iran .

Arabs of Khuzestan are Shia, they can't join IS nor would they want to join them. The Baluchis on the other hand are Sunnis, they would be accepted into IS if they choose to go that route.

Around 3-4 million (with the exception of Kurds) and vast majority not the extreme Wahhabi type, but moderate Sunnis and well integrated.

Politics, competition, influence and power fuel the current sectarian tensions between Shia and Sunni Muslims, the two main branches of Islam. The root of the hostility is a political question in itself: who is the legitimate successor to the Prophet Muhammed?

Both sects share common religious beliefs: the five pillars of Islam, the Quran and Prophet Muhammed being the last messenger of God. The differences lie mostly in the Shia and Sunni interpretation of the hadiths and sharia law on how Muslims should define and govern themselves. But for the most part, the religious differences are superficial and most Muslim shun sectarianism. The conflict and violence is more about political power, where geo-politics intertwines with theology.

The Arab speaking population in Iran (most if not all of whom reside in Khuzestan province) are Shia muslim who want no part of wahabi sunni extremism .

However , if ayatollahs had chosen to go Syrian Assads route for example ( use of chemical weapons against defenseless civilians ,wide spread use of rape, ,torture and murder as means of subduing a restive population ) Iran indeed would have looked very different today .
The test came during the summer of 2009 Teheran Green uprising .What saved the Iranian regime great deal of trouble or perhaps its very survival , was its calibrated and careful use of violence against the street demonstrators .Had it resorted to whole sale use of violence , things would have turned out very differently and badly for ayatollahs . Lesson learned was that use of maximum force won't always net maximum results .Had Syrian regime learned that lessons from his Iranian compatriots , Syrian civil war would have been a far easier problem to resolve .

Do not forget that the Islamic Republic was built on the ashes of the shah's dictatorship. Having been born through revolution, the current leadership knows very well how to avoid another one. They have entire military/security apparatus devoted to counter-revolutionary suppression. They tried to advise Assad about this at the very beginning of the Syrian uprising in 2011, but he followed in his father's footsteps instead of heeding the more recent Iranian experience.

In general, defining Iran as a Shia Muslim state has been more acceptable to the Arabs in Khuzestan, who are also Shia. The previous regime had a more ethnic definition based on Persian language and culture, which, although more inclusive of religious minorities such as Christians, Jews, Bahais and Zoroastrians, alienated the hell out of ethnic minorities like Arabs, Turks, Kurds, Baluch, etc.

these men died fighting for a vile and bloody dictatorship.

they may have been brave, but their cause is ignoble