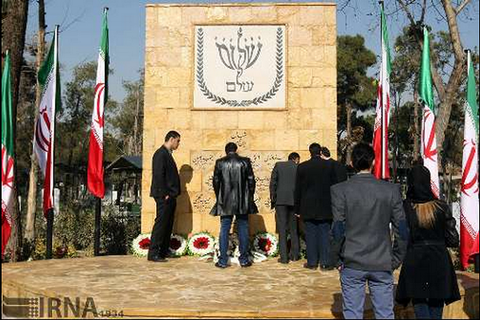 Authorities in Tehran have unveiled a monument to slain Jewish-Iranian soldiers who lost their lives during the Iran-Iraq war between 1980 and 1988. A public ceremony marked the memorial’s opening on Monday. Banners showed the images of fallen soldiers, hailed as martyrs in Farsi and Hebrew inscriptions.

All religions and no religion should be viewed as equal. We must learn to live together.

how many Jewish Iranians were executed by Khomeini's goons?

How many Jewish soldiers served and died in the Iran-Iraq war? Is their any figure regarding the Iraqi services too?

and Mr Khomeini to you bugger.

Don't know but probably not as many as the Shah's goons.


and Khomeini, the vile old man, merits no honorific and gets none from me.


Khomeini is Khomeini, not worthy of any honorific.

a priest who calls the the killing of a novelist because the priest object to a novel is a vile and honorless person.

I was in Iraqi kurdistan at 18 years old doing military service. First i was sent to Faw. Lucky for me, our commanders changed theyr mind. I left Faw then just one or two days later Iraqis attacked massively, with everything they have, to Faw when everybody were relaxing on day of Ramazan. Officers flee in cars and trucks while Basijees was trapped, it was catastrophy.

A tale of two soldiers

I have red that 300 000 jews left Iran right after the II World War, long time before the Islamic Revolution took place. Didn't like that land where they were born ???

Today there are about 25000 Jews in the Islamic Republic, who have hospital, schools, synagogues as well as couple members in the Iranian (Parliament) Majlis.

A few hundred and the loses as listed on the monument are barely a dozen.

Anon 8:39 AM
Have you any evidence to back up your claim?

Good evidence to prove Iranian are not anti Jewish as I know some Western media love to portrait Iranians that way, especially after Ahmadinejad 8 years in power.

Anon 8:34
That's true. Look at all the famous Iranian Jews of Israel.
1) Moshe Katsav left Iran in 1951,
2)Shaul Mofaz all left in the 1957
3) Israeli general Eitan Ben Eliyahu's father left Iran in 1922
4) Dan Halutz's family left Iran long before that where he was born in Israel in 1948.
5) Jimmy Delshad Beverly Hills Mayor left Iran in 1959
6) mordechai Zar, Israeli politician left in 1935
7) Avshalom Elitzur, the famous physicist left in 1959
8) Samuel Rahbar, the diabetes researcher who discovered of HbA1c, left for the US in 1969
9) the famous Israeli singer knw as Rita left in 1970

Notably former President Katzav is now in an Israeli Jail for raping a woman and Dan Halutz was disgraced and forced to resign in a insider trading corruption scandal.

This just happened today too in Iran. Funny how news like this never is mentioned in the western media. It clashes with their narrative of an evil anti-semitic country.
http://www.presstv.ir/detail/2014/12/29/392318/literati-commemorate-late-haim/