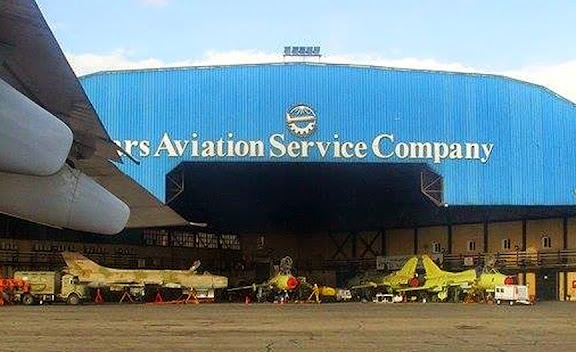 (Pars Aviation Service Company is part of IRGC-ASF and subject to sanctions imposed by UNSC resolution 1747.)

Three of the Fitter aircraft are painted in yellow undercoats with one retaining its camo scheme. Aviation writer Babak Taghvaee has identified a Su-20 (IrAF serial 1182)and Su-24UM2K being utilized for parts reclamation-- such as landing gear and movable outer wing segments-- for IRIAF re-serial 3-6906.

Babak Taghvaee has a recent article on Iranian Su-20/22 aircraft published in the January 2014 edition of Combat Aircraft Magazine. Titled "Back from the brink: Iranian ‘Fitters", it details the odyssey of Iraq's Fitters as they escaped to Iran during the Gulf War, and the subsequent history of these aircraft in Iranian possession. To read the article: page 1, click HERE, page 2, click HERE.

The aircraft depicted in the above photo encompass a scheduled Iranian effort to overhaul, upgrade and attain FMC rating for a dozen airframes, to reform 71st TFS at Shiraz/Shahid Dowran TAB-7. Unclear if perhaps in the future, these aged fighter-bombers will be performing CAS missions over Iraq against ISIL. 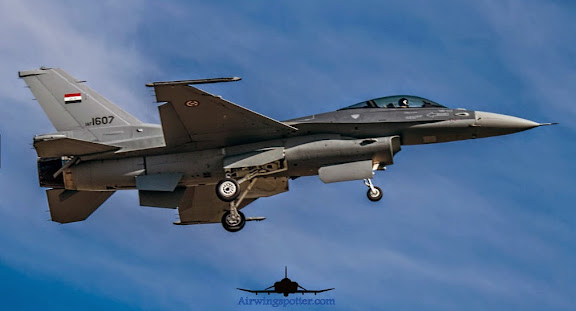 These aircraft were originally scheduled for delivery to Balad Air Base (OR9 / ORBD) but USG decided to deliver to Tuscon AZ instead, due to ISIL advances made as a result of their 2014 Northern Iraq Offensive. According to Pentagon spokesman Col. Steven Warren:

“We are going to deliver three F-16s to Tucson in December… then one per month after that through May for a total of eight F-16s. We expect the Iraqi pilots will begin flying their own aircraft for continuation training beginning in January…. All maintenance for the F-16s will be provided by [contracted] logistic support…. So they’re continuing their training, but instead of training using U.S. training aircraft they will now use their own aircraft in Tucson.” [source: Defense Industry Daily]
Posted by Mark Pyruz at 2:27 AM

The Su-20/22 despite its age remains a sturdy and potent ground attack aircraft and it is indeed a great testament to Iranian ingenuity and technical prowess to restore moth-balled aircraft from the 90's without any logs or technical manuals. Hopefully, Russia should be assisting Iran with spares and new engines as both share the same goals in Iraq and Syria. It appears from all accounts that over 36 of these airframes are still airworthy and Iraqis have enough experience to train a new generation of pilots and technicians with Iranian and Russian assistance.