Opening of U.S. Embassy in Havana 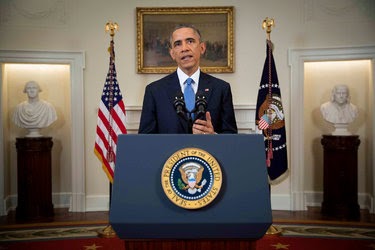 The United States will restore full diplomatic relations with Cuba and open an embassy in Havana for the first time in more than fifty years. President Obama and Cuban President Raul Castro in a telephone call on Tuesday night agreed to put aside decades of hostility to find a new relationship between the two nations.

“We will end an outdated approach that for decades has failed to advance our interests and instead we will begin to normalize relations between our two countries,” said President Obama in a nationally televised statement today from the White House. The development “begins a new chapter among the nations of the America” and move beyond a “rigid policy that’s rooted in the events before most of us were born.” (The New York Times, 17 December)

A brave move by both parties but especially the US president to break the 50 year old ice between these two neighbors! Bravo!

US is now operating in a multi-polar world with the epicenter in Asia and should behave in a more mature manner than imposing counter-productive "sanctions" and embargoes that just create more anti-Americanism around the world. The days of bullying and thuggish behavior are long gone. Kudos to the Castro brothers and the people of Cuba for not buckling and remaining true to their principles. The US now needs to restore ties with Iran and end the even more counter-productive sanctions against a much larger economy and key nation with many common goals in the region.

if all sanctions did not worked on small und pooe cuba, how can it work on great and rich iran ?

Well at least now obama has one foreign policy success he can point too,better than nothing I suppose..

If Iran is so great and rich then why aren't you living there, and why is it every Iranians dream to move to the west? And why were Iranians selling their kidneys for a few thousand dollars just recently?

I have always wondered why this stupid sanction against Cuba? I mean it is just on the other side of Key West and it is just a small island so why this much hostility? I never found the answer....happy to see I was not alone and Obama had the same thought!

the regime in Cuba failed and the country's economy is in collapse and the US is restoring ties now so as to be in position to observe and influence the new Cuban regime that will follow the death of Fidel.

the Catros failed ,,,and they buckled. Fidel has admitted that his economic policies don't work and now capitalism and foreign investment will return as the Cuban communist regime falls.

the US will gladly restored cordial relations with Iran as soon as the Khomeinist theocratic decays further and that vile regime begin to fall from the page of history. until then, Iran will remain under sanction

This has been not a brave move, but an acknowledgement of a failure to to think and see the developments in the world in a sane and just way.

Why Obama waited so long (until his second term and when he lost majorities in the Congress), was it prompted by the failure of Mr. Gross' "mission"?

Any openings in relations will be meaningless, without lifting all if not all the major sanctions, by the current more hostile Congress, unless this opening of embassy and promise to ease travels was designed to get better intelligence accesses and to exercise a possibility of prevention of the Russian military presence's return to Cuba in coming years, for some "carrot" concessions to Cuba, when the a tension between Russia and the West may escalate.

Assuming those US intention, there was not need to wait and waste fifty years and instead to try an approach like with the China many decades ago.

I doubt in a sincerity of this actions, because they will be run and supported by people of double standards, who interpret and ignore their ( supposedly christian) religion, which urges to love your neighbor like yourself and to reconcile with others before coming to (their) God..

" there was not need to wait and waste fifty years and instead to try an approach like with the China many decades ago."

there were excellent reasons to embargo Cuba and your simply don't have any knowledge of the reaons or of the situation in general.

Looks like you know everything, so if your friends failed to kill Castro brothers 600 or so times in the past decades, are they truly looking for a "peace", or are they disguising themselves in a "sheep skin...." ??

My knowledge of different systems of this world would suggest that latter - a "sheep skin.....".
Mr. Obama does everything to neutralize any possible accusation from "republicans and others" in that matter, that he is "giving away or compromising" their national security.
In most cases of similar matters, he has done better 'job' than any "republicans and other narrow minded ones from both 'parties' " would do.
For me however, 'differences' in their system will lead to the same final outcome, which someone born in their lands described to me, that their two party system can be compared to the same brand faulty and worn cars, that only differ themselves in their fading colors.

For most excited and "preffered" guys posting comments I would like to cite recent words from Raul Castro before the Cuban National Assembly:

-" In the same way that we have never demanded that the US change its political system, we will demand respect for ours...."