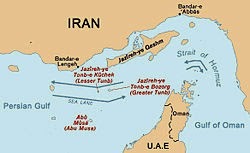 Iran today condemned the GCC statement of support for UAE’s claim over the three islands of Abu Musa and Greater and Lesser Tunbs. GCC leaders in their summit meeting in Doha on Tuesday unanimously approved a communique which contained language reiterating their pro-UAE position on the islands.


Iran claims sole sovereignty over the three islands and has controlled them since the British departed the Persian Gulf in 1971.

“The repetition of the meddling stances on the Islamic Republic of Iran’s sovereignty over the three islands of Abu Musa, the Greater Tunb and the Lesser Tunb cannot influence the existing legal and historical realities and these islands are inseparable parts of Iranian territory,” said Marziyeh Afghan, the spokeswoman for Iranian foreign ministry (Fars News Agency, 10 December)
Map credit: Wikipedia
Posted by Nader Uskowi at 12:54 PM

Those three islands should remain Iranian. Of course, the old colonialist imperialist power i.e. Great Britain was the lead instigator between nations, across the globe, but particularly the Middle East, insofar that it effectively prepared the ground for many of the historical disputes and wars that came to unfold in the region, after its departure. They took away a country's territory, switched around ownership of territory, re-drew borders at will, established Sheikdoms that advanced British interests etc etc. In my opinion, as things stand right now, GCC should accept and respect Iran's wish to retain these islands. The GCC simply have to accept the status-quo regarding the islands. Infact, no solution exists other than peacefully acknowledging the current Iranian ownership of the islands. It is certainly not worth creating tension over three small islands.

I am really happy you are going to the colonial roots of this problem and as a matter of fact of many of the problems in the region. It seems the colonialists are now back again in the region to finish their job by creating tension and friction between neighbors. As with regards to these islands the UAE has since its independence made the baseless claims and time after time different Arab leaders have used it as a way to show power in the region or claim money from the rich UAE for their support. Having said that the GCC doesn't really fully understand the fact that they have consistently irritated the Iranian nation for some small islands which they might not even use if they get back. But the enormous hate they have created amongst Iranians is just out of imagination. If there is one thing which unites the entire Iranian nation, it is direct threat against its territorial integrity and especially this claim from UAE which Iranians mainly consider to be a "city nation". I hope they can stop this poor behavior and focus on building bridges by focusing on collaboration and co-operation. They should know very well they don't have the necessary muscle to materialize their threats against Iran as the response from Iran will be "crushing", supported by a united Iranian nation. So any move or small battle/conflict from the other side can easily escalate and become a full scale war. It is therefore important to work diplomatically and remove as many friction areas as possible in order to avoid misunderstanding and potential disaster.

They have been barking this thing for a long time. There is no way the GCC can re-take the islands, so they continue the barking...

The best solution of this problem is" Iran should handover these three islands to UAE and GCC should in return 'handover Bahrin to Iran', it might be simplest solution for ever. Otherwise GCC will pass resolutions up to the end of the world with wine in close door meetings.

Or why not keep the islands and also have a referendum on the future of Bahrain as well. That way we have a diplomatic approach for solving the Bahrain crisis.

rizvi/indiaDecember 11, 2014 at 6:07 AM
Thats not a bad idea at all,infact that is the deal that iran should offer the gcc.If the gcc is going to continue with this stupid crap iran should counter it by demanding the return of bahrain

In 1835, the Bani Yas attacked a British ship off Greater Tonb. In the ensuing maritime peace arranged by the Resident Samuel Hennell, a restrictive line was established between Abu Musa and Sirri islands, and pledges were obtained from the tribes of the lower Persian Gulf not to venture their war boats north of the line.

Over the centuries since then periodically there has been more threats and more attacks, even recently today, including in the regions of the Red Sea, Arabian Sea, the Gulf of Oman and the Arabian/Persian Gulf. As a result of each incident international warships were sent to the regions to ensure the safety of international ships travelling through the regions.

As to the 3 islands of Abu Musa and Greater and Lesser Tunbs. Personally I think that as they are right next to a narrow major passageway to international shipping and that the islands are very sensitive militarily then I think that nobody should own them, and that nobody should have any weapons and intelligence surveillance equipment on them. That could be achieved and the UN could provide a very small team of unarmed observers to stay on the islands to ensure that this happens and they report any problems directly to all the UN nations at the UN.