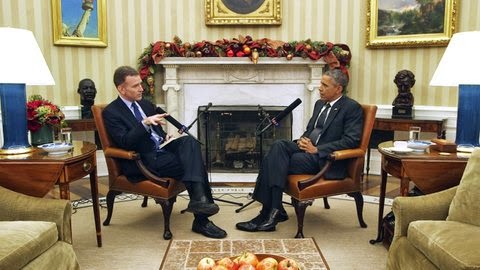 President Barack Obama said in an interview with National Public Radio (NPR) that a nuclear deal with Iran was “possible” and would be a necessary first step in any greater diplomatic engagement between the two countries. (NPR/VOA, 29 December)

Obama said he was hopeful about working to improve relations with Tehran under a scenario that Iran maintains a verified peaceful nuclear program, whose economy grows unhampered by sanctions and is integrated into the international community.

Asked about if that the United States would open an embassy in Tehran, Obama said he would “never say never,” but he cautioned, “These things have to go in steps.”

The United States severed diplomatic relations with Iran in April 1980 following the takeover of American Embassy in Tehran and taking American diplomats hostage by Iranians.

time travel is possible as well.

The GOP and other Hawks have been against negotiations from the start, and have always insisted at AIPAC's behest that no enrichment at all would be acceptable to them. Even if Obama does strike a deal, he has no authority to end sanctions, the GOP dominated congress does, and theyve promised to kill any deal struck. So whats the point in the negotiations at all. They want Iran to do with its civilian nuclear electricity program what the Qajars did with Irans oil, that is to give up any rights to its own natural resources and hand it over to European and American powers. If so Iran will spend the next 100 years trying to nationalize its nuclear energy and uranium rights.
http://nationalinterest.org/feature/us-iran-hawks-try-sabotage-nuclear-deal-11920

Even the former IAEA chief has spoken out on western approach to Iran
http://www.lobelog.com/ex-iaea-chief-warns-on-using-unverified-intel-to-pressure-iran/

Furthermore Netanyahu openly brags that he is the reason there is no nuclear deal
http://www.haaretz.com/news/diplomacy-defense/1.630466#!

Its 1952 all over again. Iran legally tries to have control over its own natural resources for its own use. A bunch of colonial powers try to prevent it. When sanctions dont work in starving the people into submission, just like in 1952 when the UK blockaded Iran, they will use force. Nothing ever changes.