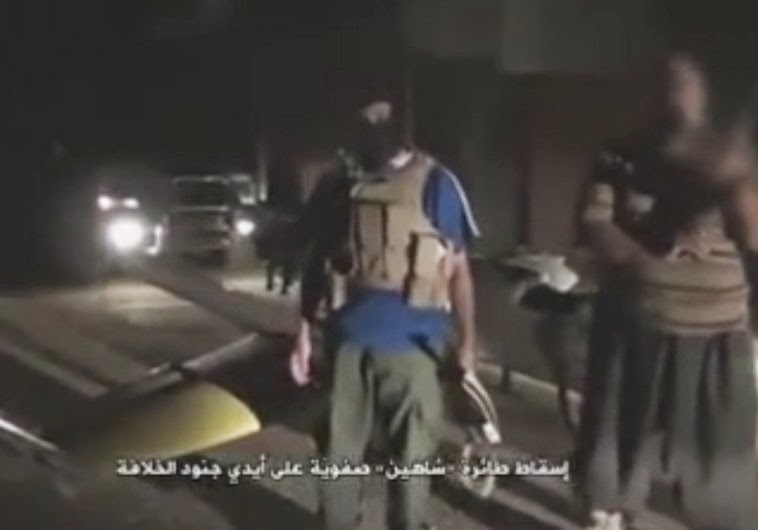 Islamic Republic said today that it has shot down and Iranian Shahin drone in eastern Iraq earlier on Monday. ISIL broadcast a video reportedly showing the downed drone. There were no comments on ISIL's claim by the Iranian military. (Reuters, 29 December)

Earlier today, ISIL also claimed the killing of IRGC Brig. Gen. Hamid Taghavi, one of the most senior Iranian officer killed in Iraqi and Syrian campaigns.

These are quite low cost battlefield surveillance drones and no big deal. Iran is always refining and updating these unmanned drones which have proved invaluable in both Syria and Iraq. IS terrorists are now grasping at straws since the military pressure on them grows daily.

Besides these birds being taken down as per ISIL's expertise to shoot them down, Iran is also letting them to shoot low cost variants down in order to get final invaluable intelligence sent to the ground station such as exact location of potential ISIL members which will later on be used for pinpoint bombings. This is specially the case as ISIL members are scattered and hard to spot from the sky even if the zone is identified it is hard to understand the concentrations of ISIL troops within the identified zone.
Some of these drones also have self-destructive functions which will take the captures with them. As such ISIL members have to shoot at them even after the crash to rule out any self-destructive function.
Iran is currently concentrating on collecting intelligence on ISIL with regards to followings:
i) troops concentrations
ii) moving patterns
iii) manpower (quantity and quality)
iv) weaponry (quantity and quality)
v) supply lines (weapons and fighting force)
vi) communication means
vii) command and control
Iran's current assessment is that ISIL has a complex and hybrid strategy which makes it difficult to craft a unified counter strategy for fighting it. As such each situation and region (Syria or Iraq) requires a different counter strategy in order to paralyze it. Currently Iran has been focused on safeguarding its main interests and avoiding the symptoms of ISIL but it knows it has to knock its heart and brain in order to once and for all get rid of it.