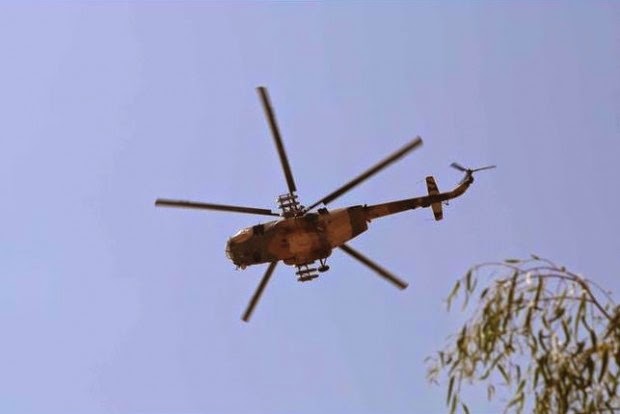 The Los Angeles Times reported on Saturday that the Islamic State insurgents shot down an Iraqi army helicopter near the city of Samarra, killing two pilots. The chopper went down in Mutassem, a strategic entry to the Shia holy city of Samarra, about 80 miles north of Baghdad. It wasn’t immediately clear what type of helicopter was shot down. A military commander told CNN today that the incident hapened on Friday afternoon.

Any information of the type of the helicopter?

It was Eurocopter The EC635, built by Airbus Helicopters, is used for transport, surveillance and combat. The EC 635 is Eurocopter's powerful lightweight twin-engine army helicopter designed for air-to-air combat and ground support. It is also used as a utility chopper, Iraq has the civilian version but some have been armed with adhoc weapons systems like machine guns and rocket pods, but have no chaff or ECM pods for counter-SAM threat. They fly them low to avoid MANPADS, but are vulnerable to ground fire from the proliferating 23mm twin and quad cannons and 12.7 mm heavy MGs that are pick-up truck mounted, a few lucky RPG rounds have brought down some in Iraq and Afghanistan as well.

The Iraqis use it as a reconnaissance chopper since they have no dedicated ones like the OH-58 Kiowa scout. It is feared that the ISIS terrorists may have captured ground-to-air missiles capable of shooting down airplanes and helicopters when they overran Iraqi and Syrian army bases this summer.

Thank you for the information. I believe the International Community must take action on ISIS as it is now endangering the region with anti-air missiles and earlier reports also confirmed they had taken over some ground-to-ground short and medium range missiles as well. Together with reports/rumors on Chemical Weapons possession this is becoming a dangerous game for everyone in the region, including those who support ISIS.