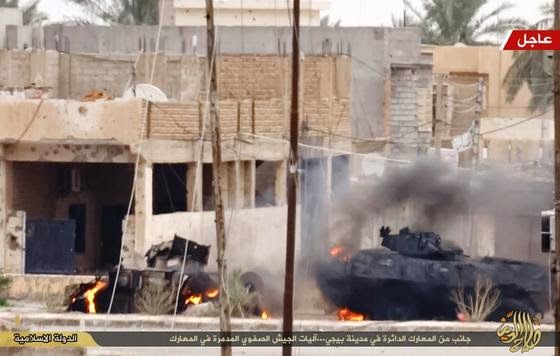 The Islamic State insurgents have retaken control of the central city of Baiji after the Iraqi military ordered its forces to retreat to the nearby refinery. The Iraqi forces, with the help of Iranian-backed Shia militias, had taken city from ISIL only last month. The militants posted a number of photos on the Internet, showing captured and destroyed armored vehicles, including M-1 tanks and Humvees, as well as weapons and ammunition that were abandoned by fleeing Iraqi forces. (The Long War Journal, 18 December)

Recapturing of Baiji was a major victory for ISIL after a string loses in recent weeks. Before retaking Baiji, however, ISIL also took control of some towns near Samarra. The Iraqi military and Shia militias had ejected ISIL from Jurf al-Sakhar, Amirli and Jalula, and the Peshmerga had retaken several northern towns.

On Thursday, the Peshmerga, backed by U.S.-led coalition airstrikes, retook large swath of territory between Kurdish autonomous region and Sinjar, and are poised to retake the city of Sinjar in the next few days.

Meantime, the Pentagon said hundreds of U.S. troops are now deployed in the restive Anbar province. About 350 troops are stationed at Al Asad Air Base. The force is composed of advisors and support personnel, as well as a force protection contingent, Stars and Stripes reported on Thursday. The troops on the ground are helping the Iraqi Army’s 7th Division, stationed in Anbar, with developing strategies, mission planning and coordinating close air support operations.

Photo credit: Scene of battle at Baiji in a photo released by ISIL (The Long War Journal)
Posted by Nader Uskowi at 8:00 AM