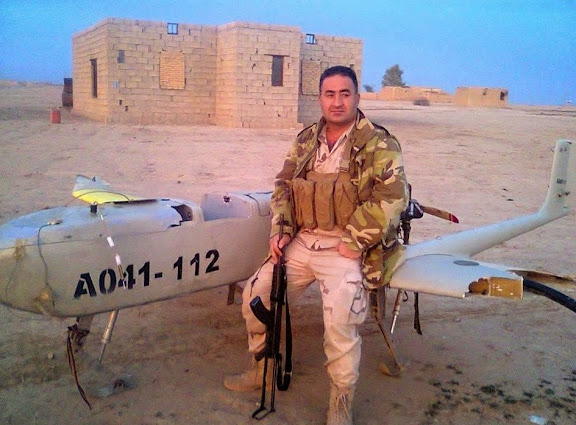 Above: Kurdish Pesherga militiaman poses next to Iranian-built Ghods Mohajer-4 UAV (serial A041-112), recovered this week. Serial markings and damage indicate this airframe previously captured by ISIL, with ISIL photos posted on social media circa 18NOV14.

COMMENTARY: The Iraqi Army has been correctly criticized for not destroying military weapons and equipment before executing a retreat. Here we have an example of ISIL retreating without destroying the remains of a captured UAV.

Observations such as these contribute towards a perception that ISIL combatants are comparatively lacking in technical adeptness.
Posted by Mark Pyruz at 2:51 AM

It appears as though cruel savagery is all the technical adaptiveness those barbaric ISIL elements possess .