Rouhani administration to increase defense spending by over 30% 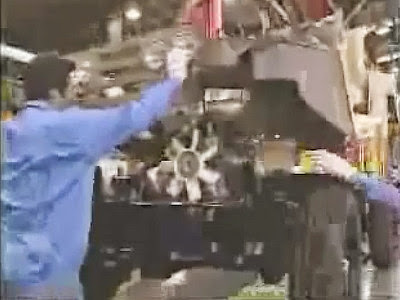 Above: grainy video still of assembly line for Safir jeeps, a type supplied to allied forces of the Iran-led coalition against ISIL in Iraq.


Iranian President Hassan Rouhani submitted to the parliament the proposed budget bill for coming Iranian calendar year (starting on March 21, 2015) in which the total defense budget has increased by 32.5 percent.

The overall draft budget ceiling is estimated at over 293 billion dollars.

The proposed budget bill will be subject to parliamentary debates and amendments.

The allocation of more financial resources to the national defense budget is aimed at reinforcing the country’s defense capabilities.

COMMENTARY: On the face of it this announcement would be considered surprising, given a reduced projected revenue based on falling crude oil pricing. There are at least a couple of takeaways from this proposed defense budget increase:

1) The proposal may be a means of political posturing for the Rouhani administration, in seeking to present itself as being tough on defense, while...

2) Positioning its nuclear negotiations as a means of reducing sanctions and-- importantly-- being able to live up to a proposed increase in defense spending.

Currently, Iran is faced with increasing security threats in the region and at its borders, manifested by advances made by ISIL and al-Qaida linked groups. Increases in defense spending can be seen as a response to such. And naturally Iran's military leadership would be pleased to receive a greater expenditure from the national treasury.

Unclear if the Iranian means of defense budgeting mirrors the American example, in not including direct costs of foreign wars, certain types of strategic weapons research or certain examples of foreign military-related assistance.
Posted by Mark Pyruz at 11:21 PM

the official defense budget is not really the extent of military expenditures by Iran and other estimates put the total in 2013 to be 17 billion dollars.

What they should be doing is negotiating like adults with Russia and China for delivery of some airplanes, SAMS and other defensive weapons.

no wonder, we saw yesterday the Israel attack on Syria

Preparations for a new war, or a increased need to finance Syrian war?

Iran can't get any equipment good enough from either Russia or China, both members of the UN Security Council and both pledged to not sell weaponry to Iran.

what Iran should be doing is complying with Security Council directives.

The Syrian and Iraqi campaigns are indeed very costly for Iran: The costs associated with the Quds Force, IRGC-GF, and IRIAF operations; support of Hezbollah operations in Syria and thousands of Shia militias in Iraq and Syria; arms shipment to Syria; war-related non-military aids like oil shipment to Syria; etc... The $10 billions budget probably is exclusive of these conflicts, as these campaigns could cost almost that much. Probably the $17 billions mentioned by Anon 1:57AM is closer to reality.

Of course Iran's military spending, even with the 32% increase this year, pales in comparison to Saudi Arabia's and probably is less than any other GCC country. But still for a country under sanctions, and with oil prices so low, the Syrian and Iraqi conflicts are becoming a financial nightmare.

What a shame for Rohani to increase it only by 32% when Iran is almost threatened from all sides. As an Iranian I demand the removal of this idiot who has for almost two years conducted negotiations without any tangible results than a worsened security status for Iran.
I am confident that the heroic armed forces of Iran from all branches will, as they have historically done, take the control of the nation in their hands soon and remove any useless element who believes you can negotiate with people who are teaming up with Iran's worst enemies in the region to physically destroy the progress of the Iranian nation.
I am confident the time is limited for Rohani and his administration to show some tangible results from his so called diplomatic and liberal efforts and if that is not the case he will be removed as the assessment in Iran is that the current direction will only weaken Iran and its influence in the region and that a dramatic change is needed which will certainly be backed by Russia as it is also experiencing Western sanctions.

Plans to open new British naval base in Bahrain, in addition to the other countries' ones, show that the West is not serious about a necessity to come to therms with the Islamic Republic, and plans steps for a regime change in the IR of Iran ......

Why they don't want to implement a detente like with the China ?
I think that that detente with China was designed on assumption of "a Trojan horse", that trade with China will bring an access to undermine the China Communist party's status.

And now, they envision that a stronger China with its economy, may claim, at some point of the future, some territories from "weakened" Russia.

Sorry but the Chinese-Russian alliance is holy, they don't kid on that as they know they have more powerful enemies which they need to resist in the near future.

there is nothing even stable about an alliance between Russia and China...and calling it holy is quite odd.

Anon at 5:02 PM
The Chinese-Russian alliance is for now in certain political spheres, but ecomically China has its own way, and when Russia would ever disintegrate, they would join other countries like Japan (Kuril Islands), Ukraine (Crimea), Finland (Karelia), Germany (Prussia), and separatists in Chechnya, Tatarstan, Bashkiria and so on.....which openly, or from time to time rise these issues, with open or hidden suport of main westen players.

Chinese school books teach that China lost some their terrotories due to aggressions of others.....,and never accepted those loses.

The West knows Russia's weaknesses and tries to separate China from Russia at many economical forums....

The top US journalist Thomas Friedman tries to explain those western "ideas" in his new article "Oil price war.... impact on Russia, Iran".