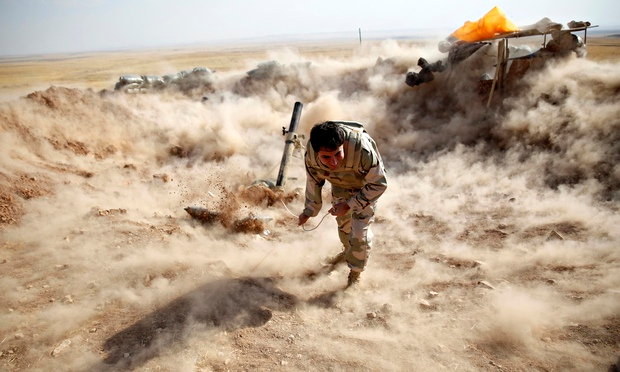 A large Kurdish Peshmerga force, backed by U.S.-led coalition airstrikes, launched a major operation on Wednesday to retake the town of Sinjar, which has been under ISIL control since August. By securing Sinjar area, the Peshmerga will disrupt ISIL’s line of communication connecting areas under its control in Syria to Mosul.


The Kurdish regional security officials were quoted by the Associated Press today as saying that the Peshmerga forces have entered the town of Sinjar and have retaken at least eight villages around Sinjar, driving “large numbers” of ISIL insurgents to flee to Mosul and other nearby areas under their control.
The Combined Joint Task Force- Operation Inherent Resolve (CJTF-OIR) has been conducting airstrikes against ISIL positions near Sinjar. The CJTF, under the command of U.S. Army Lt. Gen. James Terry, oversees operations in Iraq and Syria against ISIL.  40 contributing nations are members of the combined task force.  Gen. Terry reports to CENTCOM Commander Gen. Lloyd Austin.

UPDATE: Peshmerga forces retook control of the city of Sinjar in biggest victory in months against ISIL. (Saturday, 20 December)

I have respect for the other 39 countries in the coalition but being honest the bulk of the work, as always, must be done by the US forces from air. My only question is why US is not intensifying the aerial bombardment against ISIL. I mean the number of sorties should increase so that ISIL don't get the chance to breathe. Right now it seems US bombs occasionally instead of intensively. Or is it so that US wants to damage ISIL just enough but not entirely in order to use it against regional powers such as Iran and Syria in its bargaining and negotiations?

The answer to your question is simple. Unless Iraq has armed forces ready to move into the places that have been bombed so that they can physically capture and hold that position then ISIL will just move more of its armed forces back into that position.

Iraq does not have sufficient armed forces and some of the coalition countries are helping Iraq to train more soldiers, so until Iraq has more trained soldiers all that the US and coalition countries can do is just occasionally bomb some ISIL targets that will gradually help to degrade ISIL's ability to fight.

When ISIL (Sunni Muslims) initially attacked Iraq ISIL was a small armed force and many Sunni in the Iraqi army defected and joined ISIL taking their weapons with them. That is how ISIL became such a large strong force quickly and captured so many Iraqi cities, army bases and arms depots where that weakened Iraq militarily and why Iraq is in the position it is today.