‘Iranian Airpower In Iraq’ as detailed at Business Insider

The following are comments by Mark Pyruz in reference to Joel Wing’s post of 16DEC14 at the "Musings on Iraq" blog titled “Iranian Airpower In Iraq,” which was reposted at Business Insider. Joel Wing’s writing identified in italicized blockquotes, followed by commentary:


Iranian planes supported an Iraqi military operation to retake two villages from the Islamic State (ISF) in Diyala. In the middle of November Iraqi Security Forces, militias, and the peshmerga started a campaign to retake Jalawla and Sadiya in northeast Diyala, which was completed on November 23. During that period Al Jazeera filmed an Iranian F-4 Phantom jet flying over the area. According to an Iranian military expert, Tehran was carrying out air missions there from November 18-23 using F-5 and F-4 jets, and UAVs. The planes were said to be flying out of Kermanshah air base in Iran.

COMMENTARY: Mr. Wing cites an article at Zawya.com in identifying Kermanshah as the airbase used by IRIAF for strikes against ISIL in northeast Diyala Governate.

The air facility at Kermanshah is Shahid Ashrafi Esfahani Airport (KSH / OICC). This facility maintains a civilian airport and Iran Army Aviation base for rotary wing aircraft. It is possible IRIAF is using this facility as a forward air base for combat missions in support of allied forces in Iraq.


Iran is providing training to Iraqi pilots on Su-25s, and MiG-23s and 29s at the Kermanshah air base. The Iraqi Air Force is undermanned and lacks fighter jets and trained pilots.

COMMENTARY: Mr. Wing uses the same source at Zawya.com in providing these details. It should be pointed out that IRIAF and IRGC-AF do not possess Mikoyan-Gurevich MiG-23 aircraft and would not be capable of providing training for this type. Moreover, the air facility at Kermanshah would not be ideal for the training of Iraqi pilots.

Were Iraqi pilots to be trained by IRGC-QF on Sukhoi Su-25 CAS aircraft, a much more suitable location would be the IRGC-AF fighter squadron base at Shiraz.

Likewise a more suitable IRIAF training base for the Mikoyan-Gurevich MiG-29 would be Tabriz/Shaheed Fakouri TAB-2, or Tehran/Mehrabad TAB-1.

In addition to the Al Jazeera segment, additional footage of IRIAF McDonnell Douglas F-4E Phantom II fighter-bombers in action over Iraq has surfaced on social media. Below are video stills and the complete video segment posted 07DEC14 on YouTube: 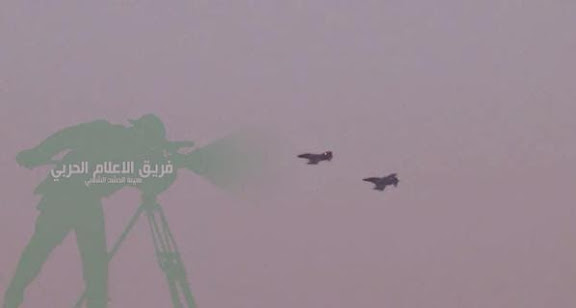 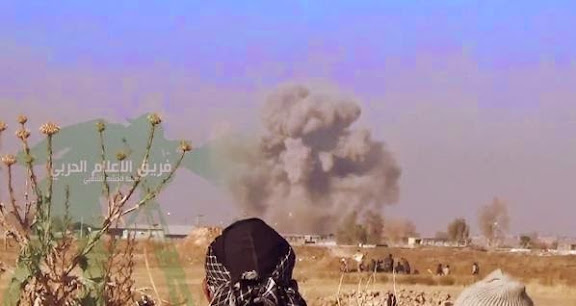 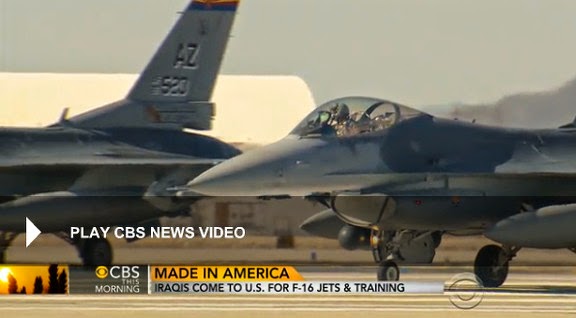 Also of interest is this CBS News video broadcast 16DEC14, titled "Iraqis come to U.S. for F-16 jets and training." Complete segment can be seen HERE.

Responding to a question, an IqAF pilot states he is ready to fly combat missions in defense of Iraq against ISIL. By the number of Arizona ANG F-16C/D aircraft visible at Tucson Air National Guard Base, it does appear these Iraqi pilots could potentially be provided with available F-16s for combat missions against ISIL, were a political decision be made in Washington. This in addition to the few F-16IQ aircraft now delivered to Tuscon ANGB, or in flight trials at NAS Forth Worth JRB.
Posted by Mark Pyruz at 6:28 AM

It is good to see the new generation of IRIAF pilots are good and professional as the IIAF pioneers. The Shah was indeed a genius in picking the F-4 Phantom as the workhorse of the Iranian airforce, despite some reservations from General Khatami who was also looking at the A-4 Skyhawk as well, but over-ruled by the Shah who had a keen eye for the best technology being a pilot himself. Despite its respectable age, the F-4 particularly the E version still the mainstay of the IRIAF is one the fastest, most versatile and powerful aircraft ever built and a joy to fly. Even today it can match in every respect the performance of any of the latest generation of combat aircraft now in production, if upgraded with new avionics, weapons systems and in the hands of a skilled pilot.

The late production model E version delivered to Iran could carry the heaviest payload of over 16,000 pounds or more than the load of the WW2 B-29 Superfortress, but at supersonic speeds and with the two GE J-79-17 turbojets that can do a short-after burner sprint as high as 1600 MPH (Mach 2.43) outrunning even the most capable 4th generation fighters. The Iranian F-4E was the first version to carry, along with its compliment of AIM-7 (Sparrow) and AIM-9 (Sidewinder) the deadly internal under-nose mounted M61AI Vulcan 20 mm cannon which claimed over 100 Iraqi fighters at close range gun encounters. Iranian F-4E at the Shah's request were also configured with the most advanced TISEO (Target Identification System, Electro Optical), basically a forerunner of modern BVR systems, basically a Vidicon TV camera with powerful zoom lens to distinguish long range targets mated with the AN/APQ 120 radar.

Now current version in operation with IRIAF and seen on this video have TV/IR designated ordinance like the Iranian manufactured Ghassed 2000 lb smart bombs. By the looks of the debris in the video, they seem to be working well.

Thank you for your comment. You are absolutely right, the Shah was a genius and brought so much cutting edge technology to Iran that was just fantastic. He took Iran out of the agricultural retarded state into not modernity but absolute cutting edge era. I think he will always have a special place in the hearts and minds of Iranians.
Regarding F-4 it is a plane that I just love due to the experiences in life this aircraft has a special place in my heart and mind. The F-4 and also the F-14 are two planes which I always react when I see....even if I see a F-22 I will not show the same reaction. These two American designed aircraft and operated to its maximum performance by excellent Iranian technical staff and pilots did save the Iranian nation and as such it will always be remembered by my generation. As a matter of fact they still somehow save Iran from hostile attempts and work as a deterrence although they are aged and need replacement.
I think the design of F-4 and F-14 at their time shows the great American aviation engineering and expertise which in my opinion at that time was unmatched. Having said that I think the Iranians took the design to its maximum and gave it the recognition it deserved as they were going head to head with top modern Russian aircraft which were given to Iraq. I think the American designers should give some contributions to the Iranians for this mastery of flying these objects to its limits.

thank you all for the comments... please don't forget the F-5 as well. It has a very special place in my heart as well as the others

Thanks for pointing that out too. The F-5E also have proved its worth with the IIAF and IRIAF and Iran is is the only nation that has produced many combat aces on the lightweight but very agile F-5E versions. IIAF received the end of production F-5 E models that were equipped with the then very advanced lead-computing optical gunsight and for ground attack configuration a manually depressible roll stabilized bombsight recticle (to counter the G pull roll on a lightweight aircraft).

Again on the Shah's familiarity with fighters and commercial aircraft (he regularly flew a Boeing 707), he insisted that Northrop supply the advanced inertial navigation system and Emerson AN/APQ-153/157 fire control radar. In the late 1970's IIAF acquired the GE AN/APQ 113/114 for its massive fleet of F-5E to standardize the integration and maintenance with the F-4E Phantom.

IRIAF F-5E conducted more ground attack missions in Khuzestan and Ilam fronts against Iraqi armor and massed formations than any other aircraft as the F-14A and F-4E were dedicated to deep strike, interception and counter-air suppression missions. On many occasions Iran F5E pilots after completing their ground attack missions would switch to interceptor role taking on much more faster and advanced Iraqi fighters with their two remaining air-defence AIM-9 (Sidewinders). Captain Zarif Khadem is the only known pilot in the world to shoot down a MIG-25 Foxbat with a AIM-9 Sidewinder, flying his F-5E to the limits of its endurance in an almost vertical interception.

Even today, the IRIAF pilots, technicians and engineers have a great affection for this ageless aircraft and have mastered it maintenance and upgrading like no other. Many Iranian aviation innovations and prototypes are based on the F-5E.

In the photo those 2 F-4 are flying low and due to that sooner or later ISIL will move SAMs into that area. ISIL did get lots of SAMs from Iraq when ISIL invaded Iraq. The US and other coalition countries appear to be flying their planes considerably higher than that and dropping 500-pound LJDAM GBU-54 on moving targets.
Reference, news article when those bombs were first used in Iraq.
http://defense-update.com/newscast/0808/270808laserguidedjdamdebutsiniraq.html#more

The US could easily manufacture its previous versions of planes but they are obsolete and already has started selling off or scrapping heaps of their current planes. Now I wonder how good is this new F-35, particularly when the US is not making any more F-22 and has stored away the plans and special tools to manufacture it.

do not just assume things, at start of war with Iraq we did not have single Artillery for god sake. f-4 as compare to su-24 is inferior in term of load speed and altitude.
also there was to chose f-15 or f-14, while f-15 is multi role fighter with lower cost and part also can be use in most of scenario they chose f-14 duo to project was out of money. they save f-14 project even they made for navy not air-force.
it was way better to have f-15 at war as Iran was using f-5 and f-4 deep bombing while F-15 could be way better job
more over add to that that shah bought a old retired submarine then paid more to refurbish and overhaul it, then paid even more to train people in usa, while Iran revolution started and before shah fail they cancel the contract and submarine force to go back to usa, this same scenario happened to Iranian F-16 that ended up in israel